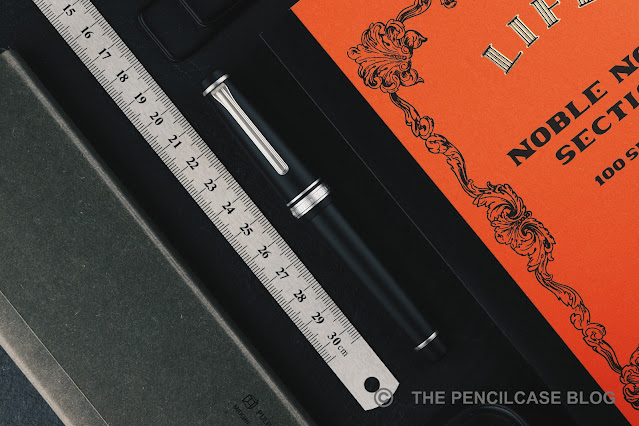 Wancher has quite a few years of experience in collaborating with Sailor. They’ve done a whole slew of special edition colorways, exclusive to Wancher’s own online storefront, including the Sailor 1911 Turquoisethat I reviewed almost four years ago. Today’s pen though, the Wancher Sand Matte fountain pen, is quite the opposite of the colorful and playful Wancher-exclusive Sailors. The Wancher Sand Matte I (and Sand Matte II, which is the 1911L version) is not even advertised as a collaborative effort with Sailor! Though that’s not as unusual as you might think.

Similar to a variety of Bungubox, Nagasawa Kobe,… store-exclusives, the Sand Matte is branded as a full-fledged Wancher pen, and comes with a few modifications that set it apart from a stock Sailor. At least that’s what I assume because information on Wancher’s website is quite sparse.

To make matters even more confusing, there seem to be a few differences between the pen I received for review and how they are shown on the website (possibly because this particular pen was sent to me quite a while ago already, so it could’ve been a pre-production version). The pen I was sent to review has the regular Sailor branding on the trims and nib. However, based on the product images of the slightly more recent Sand Matte II (the 1911L model), the trims are customized with Wancher’s branding, and the nib is one of Sailor’s custom nibs with the Wancher logo laser-engraved on it (similar to other store exclusives that have custom nibs). These small details set this pen apart from the normal Sailor special editions that Wancher sells.

I assume (and hope) that the same customizations are now also present on the Sand Matte I (the Pro Gear model). I hope Wancher makes these details a bit clearer on their website – it’d be nice to know exactly what you’re buying!

The Sand Matte of course bears quite some resemblance to Sailor’s own Pro Gear Imperial Black. From what I can tell (though I don’t have an Imperial to compare them side by side, unfortunately), it seems the matte finish on the black resin parts of the pen is indeed similar. 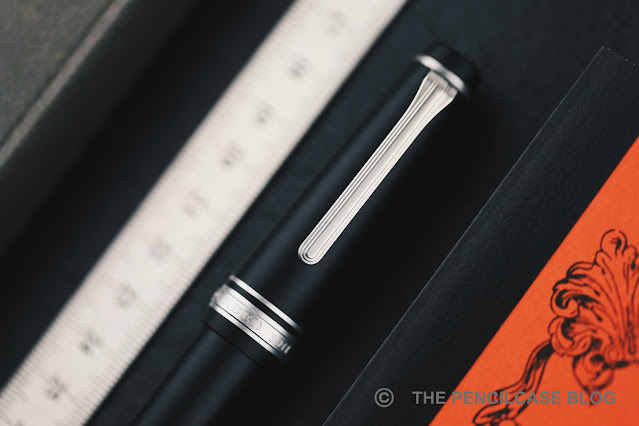 The trims are different though, as Wancher decided on treating the metal trims with a similar sandblasted finish to match the rest of the pen. The Sand Matte is available with both silver and gold-colored trims, but I find the silver trims to work best with this finish. I’ve seen a handful of Japan (store) exclusive Sailors that had matte trims before, but they tend to be elusive and damn near impossible to get! The matte trims are probably the coolest part about the Sand Matte (IMHO) and set it apart from the myriad of other Sailor exclusives out there. It gives the pen a sleek and modern look, and perhaps my only wish would be that they add the matte finish to the nib as well.

I’ve always been a fan of the Pro Gear’s design, so it’s no real surprise that the Sand Matte manages to captivate me with its clean and subdued looks. There are particular downsides to the matte finish though. From the second you pick it up, the matte surface will start wicking moisture and oils from your hands, which darkens the finish and makes it ever so slightly shinier. With heavy and prolonged use, the matte finish will slowly polish itself and become glossier due to abrasion from handling and oils from your hands. It’s a bit similar to how a Visconti Homo Sapiens or Lamy 2000 changes with use. That’s something to take into account, but in the Japanese mindset, let’s call it Wabi-Sabi. 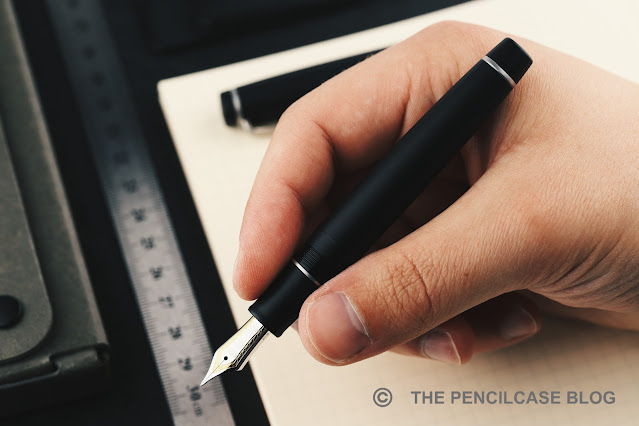 The Sand Matte is based on the full-sized Pro Gear model, which ironically means it’s still a fairly small pen (I’d love to see this finish on a King Of Pen Pro Gear!). At 12.9 cm capped, and 11.5 cm uncapped it’s a small pen and well outside my usual comfort zone. It’s certainly usable unposted, especially if you don’t have larger hands. If, like me, you tend to prefer large pens the Pro Gear is one of those rare pens that feel incredibly natural when posted. With the cap on the back, it measures 14.9 cm, and with a weight of 22 grams, it’s light and nimble in the hand. 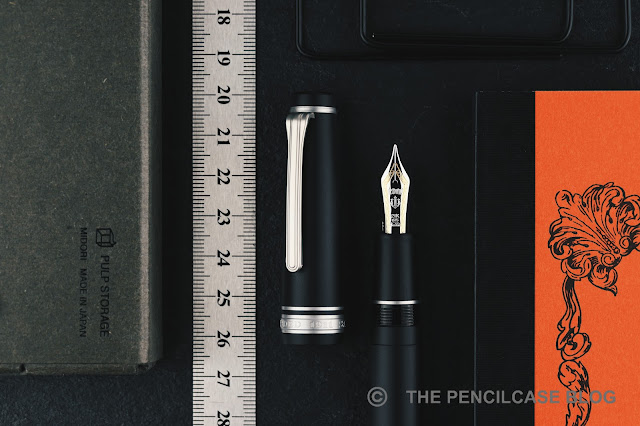 Build quality is at the typical level you’d expect from any Sailor pen. It’s for the most part very well-made. The pen is lightweight but feels solid and durable. I was happy to find out that the matte surface finish somewhat helps to hide the injection-molding seams that you’ll find on the grip section of any regular 1911 or Pro Gear, but they’re still not entirely gone on the barrel, near the threads. 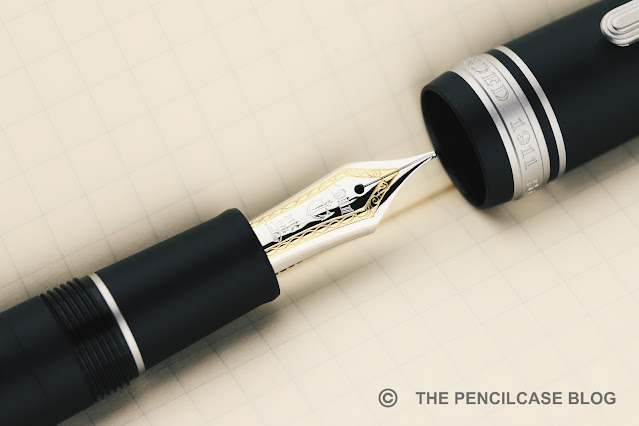 Under the hood, we find a 21k gold Sailor nib, though as mentioned before I’m not sure whether the pen you’d order would come with a bicolor nib with Sailor engravings, or a monotone nib with the Wancher logo laser-engraved on it. Either way, the nib will be made by Sailor, it’s just the finishing that differs.

The writing experience shouldn’t change, either. And that’s to say: it’ll write very, very well. My test pen came with a ‘hard’ medium (H-M) nib and it’s a superb writer: smooth and with that lovely pencil-like Sailor feedback. I’m probably the last person to say Sailors are the be-all-end-all nibs on the market, but there’s no denying that they’re very good at creating reliable and consistent writers. The medium nib lays down a line width in between western fine and medium, which is a good starting point if you’re unfamiliar with Japanese nibs. 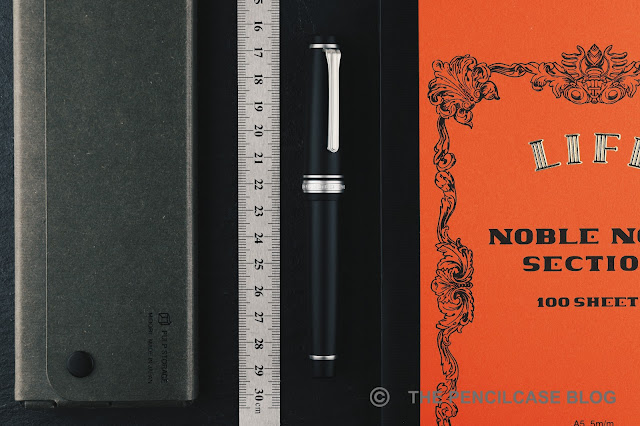 I tend not to focus too much on special edition and store-exclusive Sailors – there are just too many to keep up! – but the Wancher Sand Matte was hard to pass on. The sleek all-matte finish adds a modern and clean look to the otherwise classic design of the Sailor Pro Gear. I continue to be a bit confused at how exactly the Sand Matte (version I) is finished in terms of nib and trim details, so I do hope Wancher makes that a bit clearer on their website.

At 320$, the Wancher Sand Matte is priced similarly to other versions of the Sailor Pro Gear. It even undercuts the Sailor Pro Gear Imperial black by a fair margin, at least when comparing pricing on the Western market. Though of course, you might have to add customs tariffs and taxes depending on where you’re ordering from! I also appreciate that Wancher didn’t make it super-elusive or hard to get a hold of one, it even seems like it’ll be a permanent addition to their collection.

NOTE: This product was provided by Wancher, so I could write this review. I was in no way influenced in the making of this review, the opinions shared in this review are completely my own. This post does not contain affiliate links. 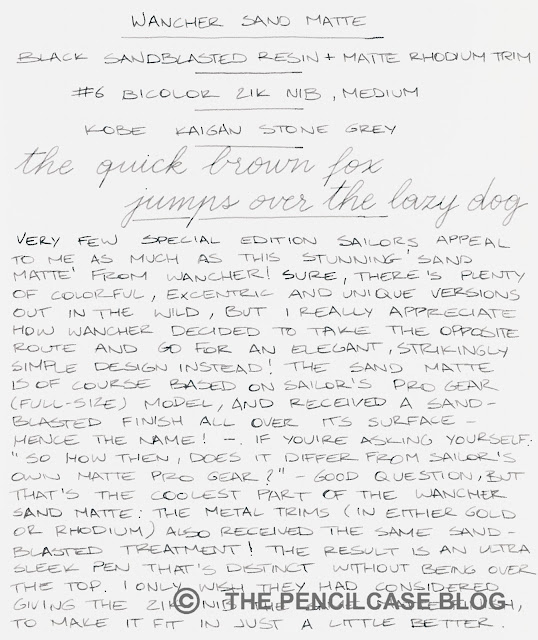 As expected, the reintroduction of the Parker 51 caused quite a stir within the community. It took me quite a while to get my thoughts about it in line, but I think -perhaps somewhat unexpectedly- my overall impression of the new version is quite a bit more positive than you might expect. I actually think it's a pretty successful hommage to the original in many (not all) ways. This... read more

My favorite part about videos is obviously the writing sample, and I wish I could do entire videos of just writing samples. Then I decided to do little snippets, for those who don't want to hear me ramble about the pen, but want to see some inky goodness to brighten their day! I hope you enjoy these snippets as much as I do! Here is the full review of... read more

Yesterday we took a look at the Momento Zero Grande 2020 (review HERE) from Leonardo Officina Italiana, and today I have somewhat of a world-premiere (nothing short of a miracle, given how terribly slow I usually am at publishing reviews!): a first quick look at the all-new Leonardo MZ Grande 'Pura' collection! If you follow Leonardo on Instagram, you may have already caught a glimpse of the Pura in his stories. It certainly didn't get past me... read more

The Zebra Sarasa is no ordinary gel ink pen. While the Hi-Tec-C and Signo gel pens tend to grab the spotlight, pen nerds love the Zebra Sarasa for its smooth ink flow, fast-drying qualities, comfortable grip, wide barrel, and retractable tip (whew, that's a long list!). Watch the video below to see the Sarasa in action, and keep reading for a detailed look at each product... read more

During the last twelve months, I have taken two surgical exams. Postgraduate exams are a whole new kettle of fish! At medical school, we needed to know a little about everything so you'd think revising for exams that were for a subset of that 'everything' would be easier? Nope. Turns out there is still a mountain to learn for surgery. The little about everything still applies, but for everything... read more

Artists, students, writers, and designers alike rely on wooden pencils for their work. Varying lead grades, smooth graphite cores, and erasability are just some of the reasons why people go back to wooden pencils again and again. Plus, who can resist the earthy smell of freshly sharpened wood? Follow along as we explore the world of wooden pencils and all that they offer for the discerning... read more

The Beginner’s Guide to Fountain Pens

It’s time to demystify the fountain pen. A lot of people think of fountain pens as archaic, inconvenient, or downright intimidating. But as soon as you first use a fountain pen, you realize that they’re really not that different from any other pen. Just touch tip to paper and write. There is a bit of a learning curve, though, so in this guide we’ll share some... read more
Custom MessageSpecial Offer!Buy this Theme!HOT