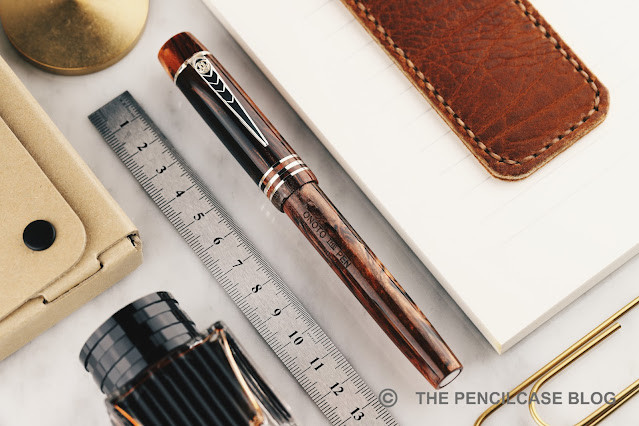 Oh boy, have I been eyeing Onoto pens for a loooong time, before finally pulling the trigger on this Onoto Magna Sequoyah LE last year! I’m kicking myself for not getting one sooner because these pens are everything they’re hyped up to be, and then some… Although ‘hype‘ is perhaps not the right word to use with Onoto, because they actually seem quite underrepresented within our community. As with other UK-based brands -like Conway Stewart or Yard-O-Led- Onoto seems to live somewhat in the shadows of the ‘traditional’ German, Italian or Japanese companies. It’s anyone’s guess as to why that is. But one thing is for sure, it definitely has nothing to do with the quality of their products, because Onoto certainly delivers in that regard! 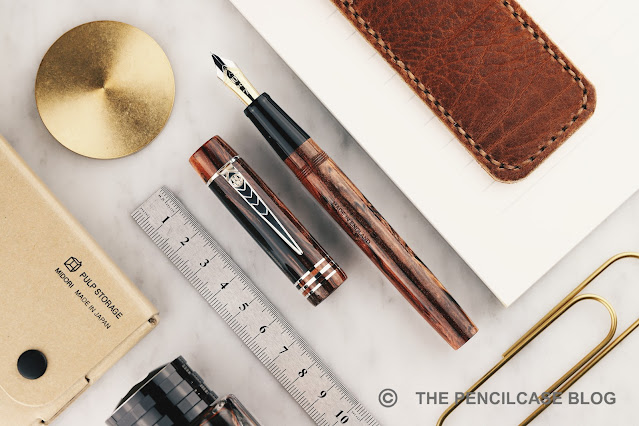 Perhaps not coincidental, those three UK-based brands mentioned above have one thing in common: they all embody -what I’d consider- traditional British fountain pen design. Perhaps this more classic and conservative approach to fountain pen design might explain why they aren’t more prominently represented on the market? But of course, that’s down to personal taste. I, for one, really appreciate the display of Onoto’s heritage within their products.
Talking about heritage: the Onoto Magna takes quite accurately after its vintage relative namesake. It’s a fairly straightforward and simple flattop design, accentuated by sterling silver appointments. Like most other British brands, Onoto proudly displays their heritage and experience with sterling silver manufacture, which shines through -literally- on the precise details of the trim found on this pen. Every metal piece is made of silver: cap and barrel finials, the three cap rings, and a sterling silver clip with a raised chevron pattern. The silver appointments add a level of intricacy to the Magna’s design, but are tastefully done and don’t distract from the beautiful material this pen is made of. 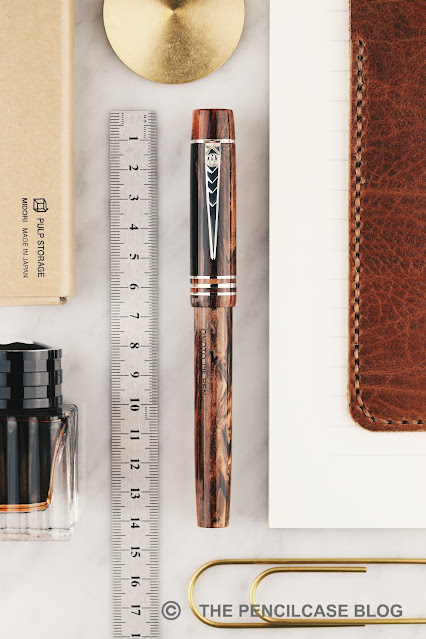 While there’s a myriad of choice in finishes for the Onoto Magna -from subtle and traditional solid color acrylics, to more colorful materials and even guilloché-engraved finishes-, for me this limited edition (200 pieces) ‘Sequoyah’ finish stands out as one of the most spectacular and eye-catching of them all. This was the pen I knew I had to have, from the moment I first laid eyes on it!
The pen is named after a Native American called ‘Sequoyah’, who established a written form of the Cherokee language. The material of the pen is inspired by the similarly-named Sequoia tree. The woodgrain-like brown acrylic is absolutely sublime. It has a surprising amount of shimmer in the warm, brown swirls, interlaced with dark streaks of solid black resin. The end result is a pen that genuinely looks like it’s made from a piece of burlwood. 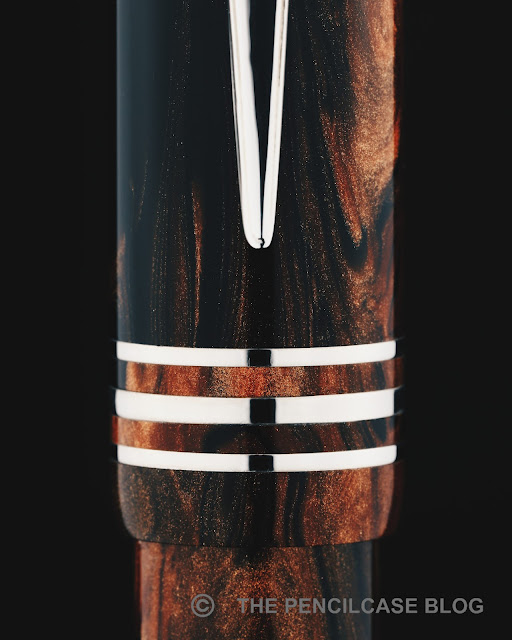 The warm tone of the acrylic balances nicely against the sterling silver trims when the pen first arrives. But it doesn’t take too long before a strong brown-ish patina (tarnish) begins to develop on the silver. While you can of course polish most of the trims with a jeweler’s cloth to bring them back to shiny silver, it’s not so easy to do so with the cap finial due to its deep texture and crisp edges. Therefore, it seems to me that the best option is just to let the material do its thing, with the patina bringing a very vintage-esque feeling to the pen. 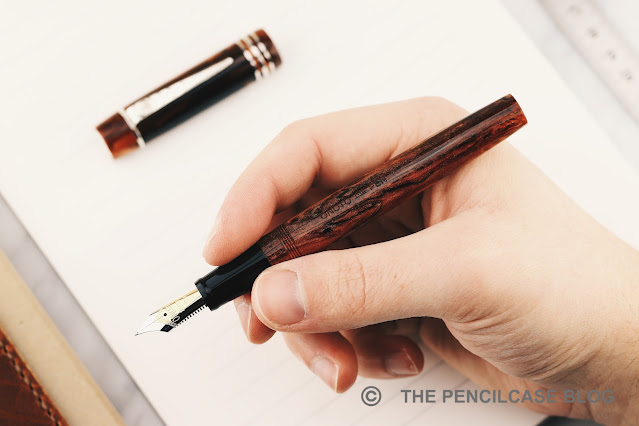 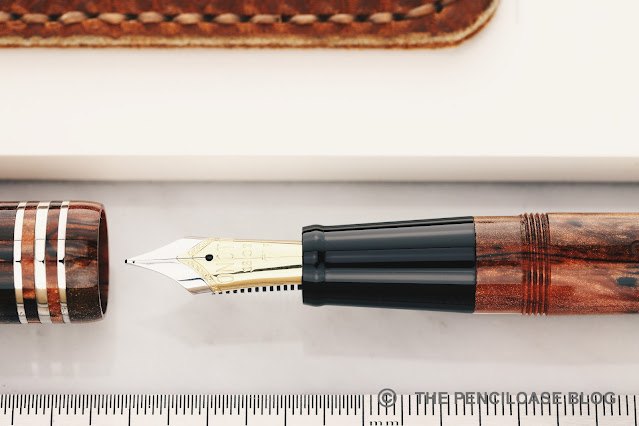 Between this one and the few Onotos I briefly tried over the years, I’ve been consistently impressed with the absolutely impeccable build quality and finishing, as well as the excellent writing comfort they have to offer. The section has a comfortable diameter (12.5mm/ 0.49″ at the back) with a straight taper towards the nib (down to 10mm/ 0.4″). The section transitions almost seamlessly into the barrel, where a set of rather shallow threads is the only thing that could possibly obstruct your grip – but it doesn’t, because they’re so well-finished. 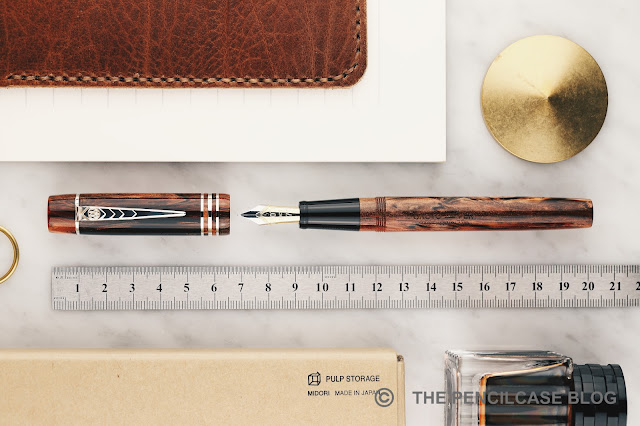 As a rather unique feature to finetune the writing comfort of the Magna, Onoto offers two weight options for the Magna pens, with an optional brass barrel, insert adding 7 grams to the 25 of the base version. I found my 25-gram version to be perfectly balanced in the hand, and light enough as to not cause any fatigue while writing. That said, because I do tend to lean towards heavier pens, I am curious to try out the 32g option at some point. 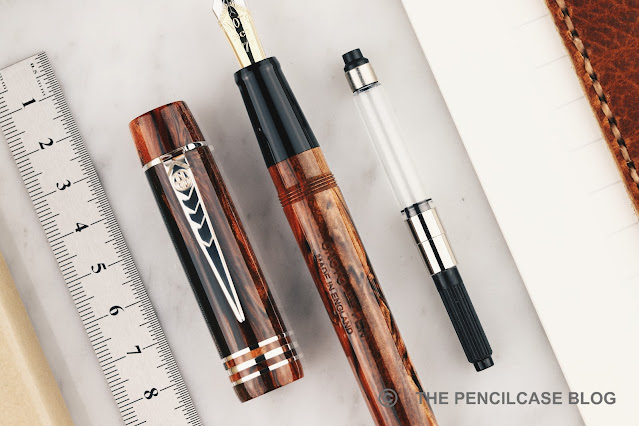 The Magna Sequoyah (and other versions of the Magna) fills using a standard international converter. Fine by me, though perhaps a bit plebeian on a pen as nice as this? There was once an option to upgrade to a plunger-filler I thought, but that no longer seems to be the case when I look at the Onoto site. 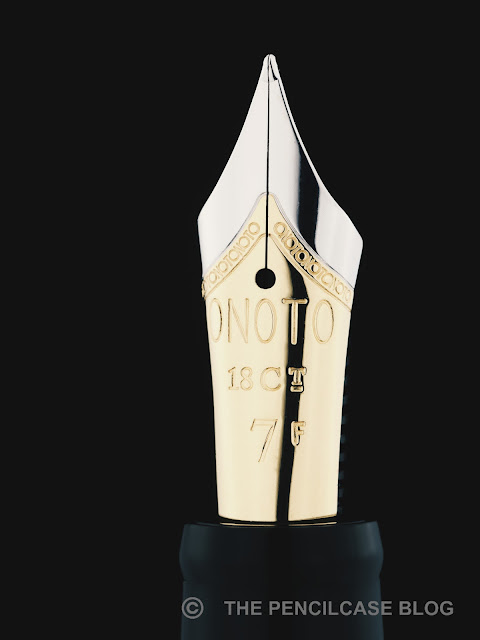 Another highlight (although if I’m honest, most aspects of this pen are highlights) of the Onoto Magna is the nib. I don’t think they produce their own nibs in-house (it looks like a Schmidt nib unit?), but whatever they do, they do it right. The #6 (in Onoto numbers it’s a #7 size) 18k gold nibs sits on a plastic feed that delivers a rich flow of ink, and it does so with flawless consistency. I went for a fine nib on the Sequoyah, and it’s definitely a beefy western fine, so you might want to step down at least a size if you don’t like your nibs to run wider. 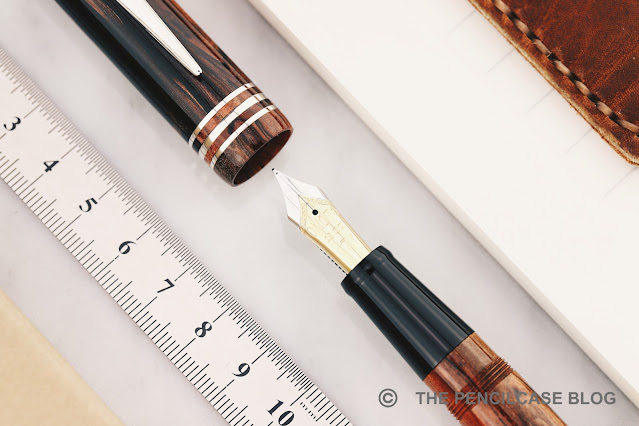 The fine nib on my pen is fantastically smooth and perfectly set up out of the box (and from what I can recall, so were the steel and gold nibs I tried in the past). The nib has a slight bit of bounce to it with normal writing pressure, but no real line variation to speak of. Particularly of note is that the nib doesn’t seem to dry out, ever. I’ve had this pen inked up continuously for almost a year now, and there were times when it wasn’t used for months, yet it always picked right up. 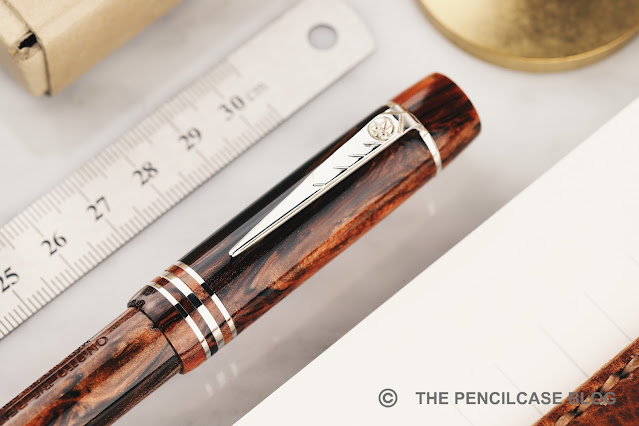 I feel like I’ve been raving about this pen non-stop, but I can’t help myself, it’s simply THAT good! Nonetheless, to round up this review I did also find a couple minor quirks that are worth noting, though not particularly deal-breaking for me: For starters, the clip is pointy… a bit too pointy! I appreciate the overall shape and design, but the tip could’ve been rounded off just a bit more to prevent it from feeling sharp to the touch. I also fear it could damage fabrics if you clip it to a pocket a bit too incautiously. The second remark is one I’ve also read on Anthony’s review of the Magna (UKFountainpens): the cap takes almost 3.5 full turns to unscrew. I’m not typically one to complain about this, but more than 3 turns really is quite a lot! 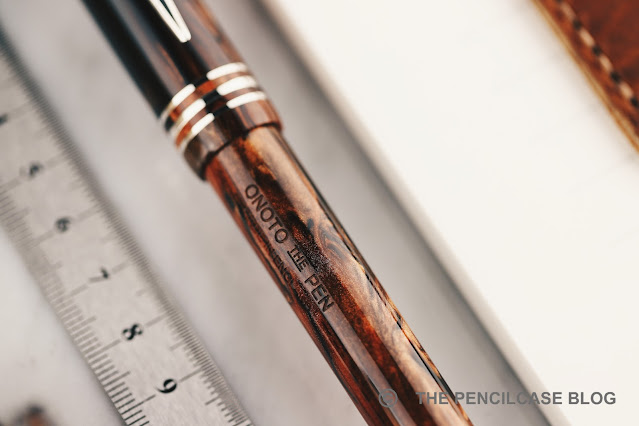 It took me a while, but I’m glad I finally pulled the trigger on an Onoto. The Onoto Magna Sequoyah manages to do so many things right, making for a fantastic all-around package. Beautiful burlwood-like acrylic, stunning sterling silver details, flawless construction, A+ writing comfort, and a perfectly tuned nib out of the box. It ticks all the boxes for me.
The price of all that? A not-so-unreasonable 640€ (600$ without VAT for non-EU customers,  at La Couronne Du Comte. Use our discount code ‘penthusiast’ for 10% off!). I think that’s a fair and competitive price for the complete package that the Onoto Magna has to offer. Also, note that that is the price for the 18k gold-nibbed version. On the Onoto website, you also have the option for a steel-nibbed version for 430€ (but the gold nib is where it’s at, if you ask me!).

Note: La Couronne Du Comte is a sponsor of this site. I received a discount on this purchase, which enabled me to write this review. I was in no way influenced in the making of this review, the opinions shared in this review are completely my own! This post does not contain affiliate links. 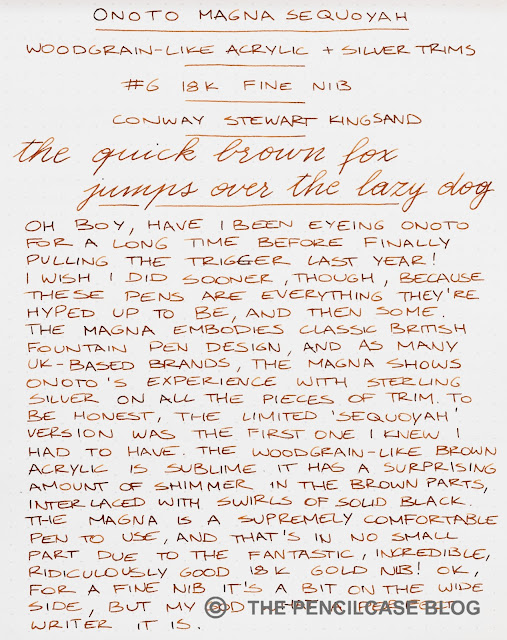 If you're a long-time reader of The Pencilcase Blog, you may remember a review I did about five years ago, of a product from a new South African company called Frara Road. Back then, I reviewed their Pen Roll (find the original review HERE): a cleanly-executed, well-thought-out leather pen roll made from a beautifully soft brown distressed leather. In the years that followed, it remained a bit silent from the... read more

How To Use An Abacus?

With its sleek body and brilliant performance, we wouldn't be surprised if you thought the Kaweco Sport was a sports car. Born from rigorous German engineering and design in 1935 as an unassuming plastic fountain pen, it has since added rollerball pens, ballpoint pens, mechanical pencils, and clutch pencils to the family. Read our exclusive interview with Kaweco’s CEO, Michael Gutberlet, to learn more about the... read more

Tortoises So Rare, They Were Thought Extinct: The Great White Whales Of The Souverän M600 Line

The talk of the last few weeks has clearly been focused on the newest tortoise release from Pelikan, the upcoming M605 Tortoiseshell-Black. While this black tortoise is a new species, never before seen, the standard bearer across the lines has always been the brown tortoise. It is somewhat ironic then that the M6xx line has […] read more

For those who suffer from tired, fatigued hands, the Dr. Grip is just what the doctor ordered. This high quality writing instrument has an innovative grip design that provides the ideal combination of softness and support. Additionally, the weight balance is optimized for an ergonomic writing experience. To find out more about the different models of the award-winning Dr. Grip, read on. ... read more

In the almost 8 years of existence of this website, I seem to have succeeded at - subconsciously - ignoring one of the most ubiquitous and widespread 'beginner' fountain pens on the planet: the Lamy Safari. Ok, I have done 'quick look' posts on some of the previous special editions throughout the years, but I've never actually made a complete and in-depth review about it. Despite that, the Lamy Safari... read more
Custom MessageSpecial Offer!Buy this Theme!HOT