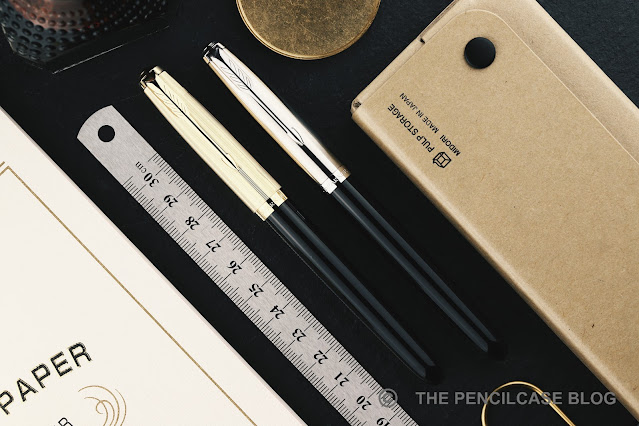 As expected, the reintroduction of the Parker 51 caused quite a stir within the community. It took me quite a while to get my thoughts about it in line, but I think -perhaps somewhat unexpectedly- my overall impression of the new version is quite a bit more positive than you might expect. I actually think it’s a pretty successful hommage to the original in many (not all) ways. This modern version is more than capable of holding its own, and I think it was to be expected that it wouldn’t just be a carbon copy of the vintage model. In fact, I’d even go out on a limb and say that I really like and even prefer some of the changes Parker made in the modern version.
Designwise, Parker stayed pretty true to the original. Between the standard version with brushed steel cap, and the ‘Deluxe’ with gold-plated details, the designs perfectly mimic the two vintage P51 (both aerometrics) I own: one with guilloche gold-filled cap and one with the ‘Lustraloy’ brushed steel cap. Especially from afar, you’d be forgiven for not being able to distinguish between the old and new.
There are some things that give it away, though: the dimensions didn’t change too much, but the new 51 did get ever so slightly longer. The barrel takes up all of that extra length, creating a different cap-to-body ratio. This longer barrel gives the impression of a much larger pen, even though in reality it’s not that big of a difference.
The second dead-giveaway is the clip, which is now the more modern arrow interpretation that Parker uses on most of their current pens. I have to admit it’s not as nice as the vintage arrow, and I find that the vintage-inspired design of the 51 would’ve warranted an equally vintage-inspired clip to go along with it. 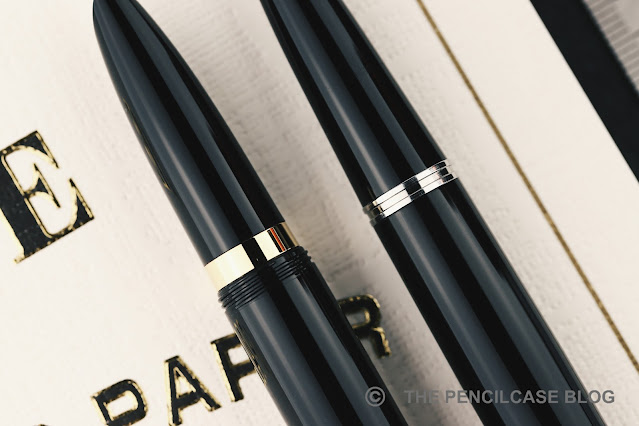 One of the major differences between the original and new 51 is the switch towards a threaded cap. Called almost a blasphemy by some, I actually think it’s an improvement over the original. At least in the condition that original vintage P51’s are in at this point -often well-used throughout the years- I’m not a particularly big fan of how the clutch-style cap works. On both my vintage pens, the cap feels mushy and it’s hard to tell if it clicked on properly or not. The screw-cap at least leaves that guessing work out of the equation, and you can be certain that it’s always on securely. No risk of accidental uncapping and an inky mess. As an aesthetic nod to the original design, a metal ring just below the threads mimics the original clutch ring of the vintage 51.
Despite the cap finial of the modern P51 really just being a single part, the stepped shape and ‘jewel’ insert somewhat recreates the look of the vintage. More precisely, it’s inspired by the first generations of the Parker 51. The metal ‘jewel’ finial is actually surprisingly historically correct, as the very first P51’s came with an aluminum jewe! 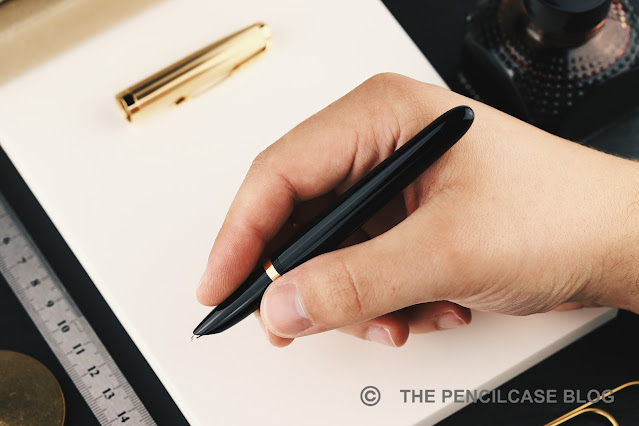 Of course the original Parker 51 -as with many vintage pens- isn’t a terribly large pen. The modern 51 measures 14 cm (5.51″) when capped, which is about 4 mm longer than the vintage.
Surprisingly, the roles are reversed when uncapped: here, the modern P51 is 4 mm shorter, coming in at just 12,3 cm (4.84″). Though of course, the hooded nib allows you to grip the P51 much closer towards the front, so it remains usable unposted. For those that do like a slightly longer pen, just like its vintage counterpart, the new P51 posts very securely and balanced. The modern P51 has a comfortable section diameter around 10 mm where you hold it, but it is of course still a rather skinny pen for modern standards. The entire pen is lightweight, coming in at around 20 grams total.
The c/c filling system was obviously to be expected. Parker hasn’t been doing aerometric-style (or for that matter, Vacumatic pump-filler) mechanisms for years at this point. As their brand name positions them in the market to cater towards a wide audience, not just the die-hard enthusiasts, it makes sense that they put their money on c/c filling systems. Not that I think cartridges or converters should be seen as a lesser option, as they remain a very accessible and practical option for everyday use.
What I DO find a really bad oversight on Parker’s end, is that a pen this price really should come with a converter included in the box. As it stands now, only the Deluxe version gets one as standard. There’s really no excuse for not including a converter with a 90€ pen, and then charging a ridiculous 8 to 10 extra euros for one. Rant over. 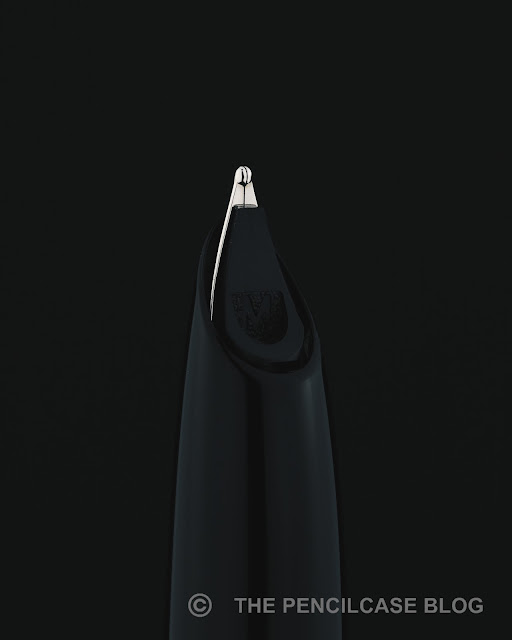 The nib, then. From what I can tell, it does indeed look like the nibs are Parker’s standard semi-tubular nibs (and feeds) that were used in the previous iterations of the IM, Vector, Jotter, and some other sub-100$ models. But precisely what nib is being used doesn’t really matter that much to me, what matters is how it performs.
The steel-nibbed standard version is a capable writer, but nothing particular to write home about. It’s a stiff nib with a noticeable amount of feedback (though not scratchy). It’s a very responsive writer, despite the tipping seemingly having a slight bit of baby’s bottom. The gold-nibbed Deluxe version is a slightly different beast though. Despite both test pens having medium nibs, the 18k gold nib writes at least a solid half size wider than the steel one – the steel nib being more true to a western medium IMHO. The gold nib remains stiff due to the hooded construction, but you can still feel the slight softness in the gold alloy despite not getting any line variation out of it. The gold nib is also noticeably smoother, with a more subtle hint of feedback. Where the steel nib is reliable but a bit bland, the gold nib on the Deluxe is much more interesting to write with and even has a slightly stubby tipping shape that offers some line variation. 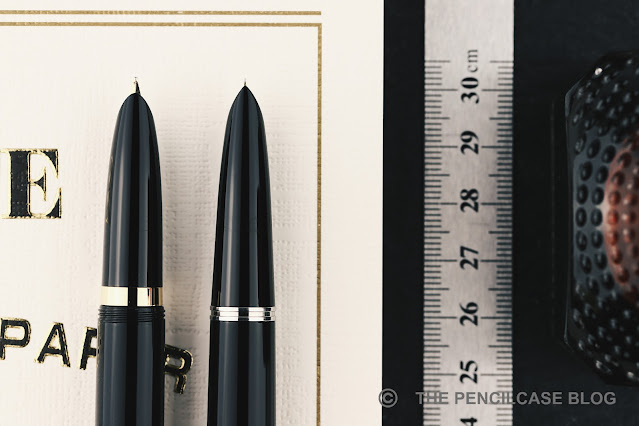 What I did find particularly noticeable, and even a bit bothersome is that both nibs seem to have a particularly fussy and narrow sweet spot in how you rotate the nib. And that effect seems to be magnified by the fact that the hooded nib sort of obstructs your view. So it is sometimes tricky to see the orientation of the nib properly.
The caps have some interesting air holes embedded in the cap finials, but those don’t seem to negatively affect the nib drying out all that much. While you can find a slight hard start from time to time, it never really dries out over longer periods of time, and usually starts right up again. 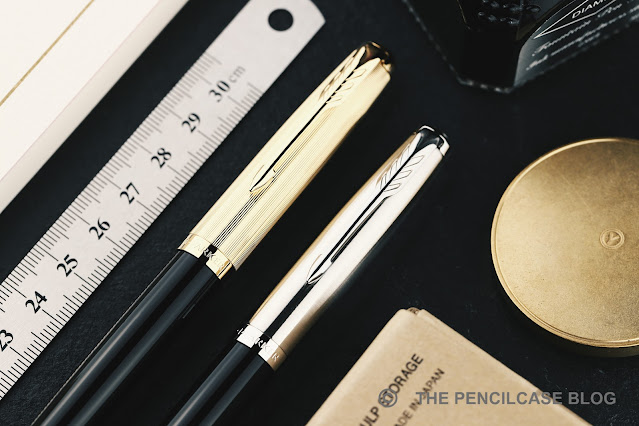 The new Parker 51 comes in at 90€ (around 100$), which is a fair price but as I said it should come with a converter included. The gold-nibbed Parker 51 Deluxe goes for 259€, which is a substantial premium for a gold nib and a slightly more elaborately finished cap. However, the 18k nib does add a lot to the writing experience. My gut feeling says that the Deluxe version would be a better deal around the 200€ mark, where it could compete with the Lamy 2000 as a more classic-styled alternative.
This product was sent to me by Parker so I could write this review. I was in no way influenced in the making of this review, the opinions shared in this review are completely my own! This post does not contain affiliate links. 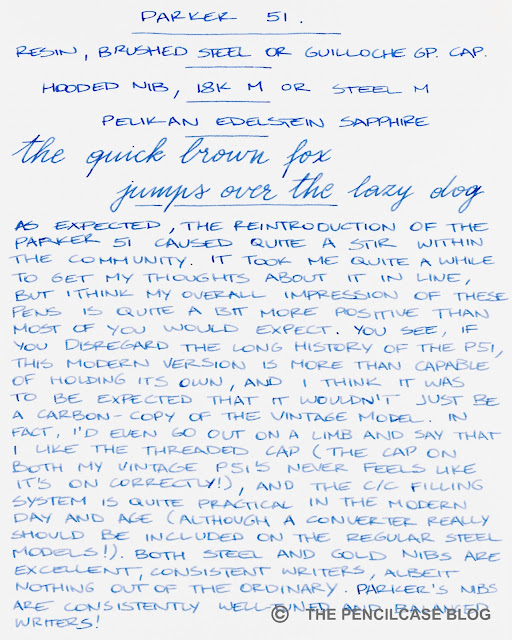 Some bullet journals that are shared online are so artistic, I can only envy their owners. Given time is a major constraint for me (along with artistic skills), my bullet journal remains as minimalistic as possible. This post is to show examples of this...! Minimalistic doesn't have to mean boring though I do seem to have a style. I've noticed that I need to make the separation of each day... read more

I purchased this notebook with my own pennies.If you enjoy and/or appreciate and you want to lend your continued support, please do check me out on Patreon. You can pledge your support and/or undying love for as little as $1. You are in no way obligated to do so. I appreciate your readership, viewership, and your support so much - thank you!  read more

With the new year quickly approaching, it’s time to break into a new planner. But with so many out there, it’s hard to find one that’s perfect for the way you plan. In this guide, we’ll compare our dated, undated, and long-term planners to save you from the guesswork. We even include illustrations of each planner's signature layout so you can easily compare every detail. Are... read more

Types of Pens: How to Pick a Pen with the Right Ink

There’s more to picking a pen than tip size and looks. The ink inside a pen is what makes it write better on certain papers than others, gives it waterproofness or a quick drying time, or infuses your writing with vivid color. Although the design of the pen tip has a lot to do with how smoothly a pen writes, the ink that flows from the... read more

This Faber-Castell Essentio fountain pen has been in use for at least eighteen months now (I can't even remember when I bought it). It was an upgrade from the Lamy Safaris and Al-Stars I was using as my main work pen. Seeing the lovely rose colour and knowing that Faber-Castell is a fountain pen brand with a good reputation, I was surely onto a winner.... right?Well, you'll probably have... read more

Another Forward, a very uncommon pen. I wrote about one once before and as ever the search box above right will take you there if you wish to see the other one. Spicer Bros. Ltd. are credited with the pen’s manufacture, as with other models and styles. This example differs markedly from the last one […] read more