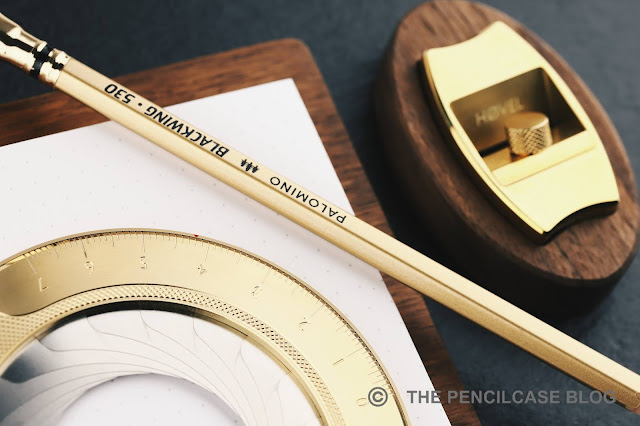 As with so many hobbies, most things within the writing community aren’t about making sensible financial decisions. Let’s be honest, it’s quite easy to be tempted into buying (ahem, hoarding) all kinds of pens, pencils, desk accessories, and gadgets that nobody really needs… but everybody wants! The two desk accessories by Makers Cabinet we’ll be looking at, certainly categorize as such. I can’t help but be quite enamored by these nifty tools.
UK-based Makers Cabinet hit the market somewhere in 2017 (then as ‘Brahman Design’) and was started by three product design graduates. Aesthetics is the name of the game with Makers Cabinet. You’d think ‘form follows function’ is out of the door then, but after using the Makers Cabinet Høvel pencil sharpener and Iris compass, the meticulous attention to detail quickly becomes clear.
As aesthetics are a big part of the appeal of the Høvel and Iris, so let’s start there… 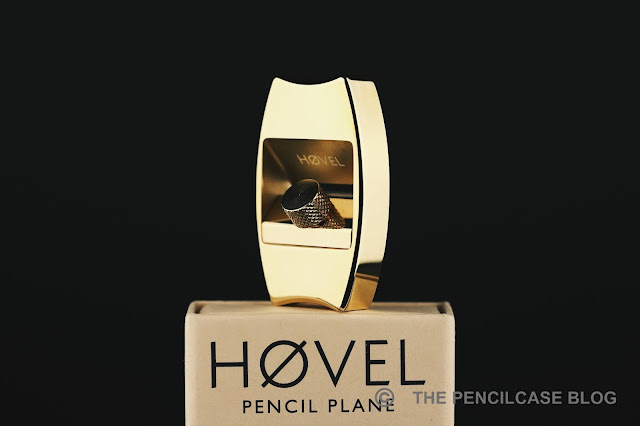 One key element returns throughout the entire product catalog of Makers Cabinet: all of their products are made out of brass! But as much as that ties together their different products, each item still very much brings its own unique look and feel.
The Hovel – a very minimal, miniature interpretation of a wood planer – is a slick and sleek chunk of brass, with rounded edges and a highly polished finish. The rectangular cutout that houses the blade setup received a lightly sandblasted finish for a subtle contrast, it also has the ‘Høvel’ logo laser-engraved there. 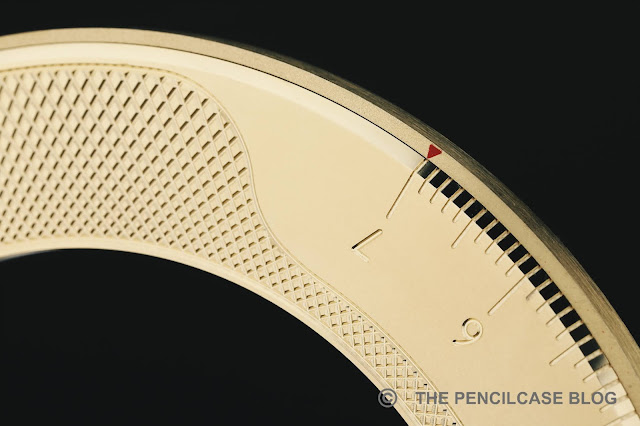 The Iris – a brilliantly overengineered take on the classic circle drawing compass – is quite the opposite in terms of design. Its crisp beveled edges, knurling, and mixture of finishes (machined finish, brushed, and sandblasted) interweave to create a distinctly industrial look and feel. One thing I noticed while using both products, is that the type of brass they use isn’t very prone to tarnishing (even though it’s not coated), I’m still waiting for the Høvel and Iris to take on a nice vintage appearance.
The solid brass construction creates a wonderfully hefty tactile appearance. So much so, that I’m constantly tempted to play with the Høvel as a worry stone… if it wasn’t for the blade sticking out of the bottom (not quite so practical as a fidget toy!). 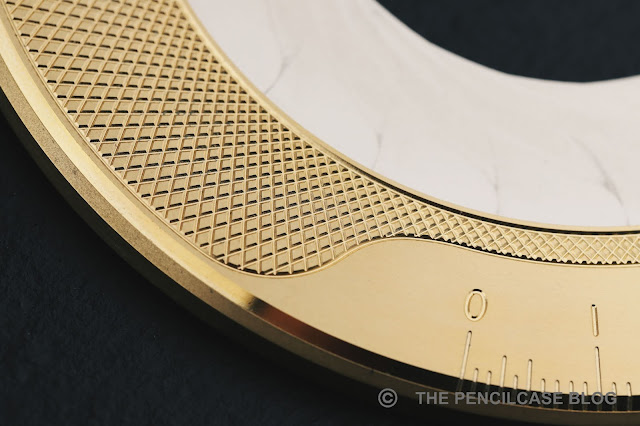 No, neither Iris nor Høvel are cheap products by any stretch of the imagination, but it has to be said that the production quality on both is really, really impressive. Machining is precise, assembly and fit and finish is flawless, finishing is cleanly done. I have no remarks, it’s as simple as that.
Especially on the Iris – a rather complex mechanical construction with a lot of moving metal parts – it’s extra impressive how everything fits together perfectly and the diaphragm slides open and closed buttery smooth. The only remark I could make is that stainless steel diaphragm blades of the Iris do pick up scuffs from sliding over each other, but that’s to be expected with these moving parts.
Let’s move on to functionality, because yes, you really are getting more than just a good-looking paperweight for your money!
Starting with the Høvel; it has been mocked in the past for its very concept: a plane for a pencil sharpener, why even?!? I must say, I was skeptical as well, and my view aligned with some reviews that stated it’s awkward and unnecessarily difficult to use.
Though as soon as I started testing the Høvel myself, I found it surprisingly easy and intuitive to use. That does come with a slight sidenote that I often sharpen pencils with a pocket knife (I’m weird like that), so I do have some practice with unconventional sharpening techniques (that’s undoubtedly my weirdest flex ever!). The alignment of the blade – just a millimeter below the plane surface – allows thin curls of wood to be shaved off using minimal pressure. With some practice, you can get straight and clean cuts and even make a nicely symmetrical point onto your pencil.
The Høvel, just like a knife, gives you more freedom in varying the angle and shape of the pencil tip entirely to your liking, and it can also be used for oddly sized and shaped pencils that don’t fit a traditional sharpener. The Høvel comes with a cute tiny package of 10 blades, which is more than enough to keep you sharpening for a while. 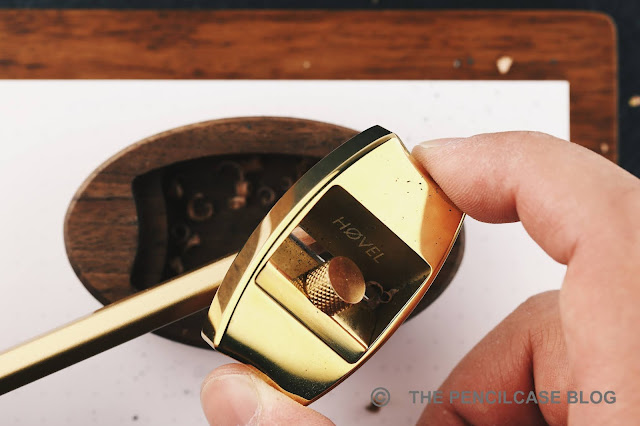 One remark I have with the Høvel is that you have to hold it sort of precariously at the very edge to keep your fingers out of the way of your pencil, and the mirror-polished finish is quite slippery. Perhaps it would be useful if they’d add some knurling or texture to the sides of the Høvel. Maybe an idea for a future iteration? 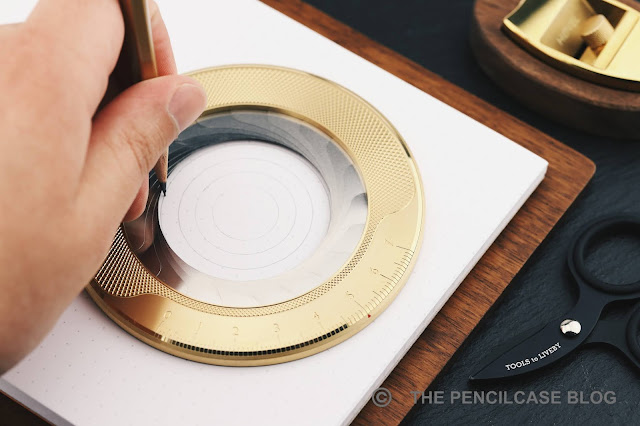 The Iris is probably my favorite of the two tools, and that’s mostly due to the incredibly smooth and precise action of the 20-blade diaphragm opening and closing by turning the outer ring. It’s very satisfying to play with! 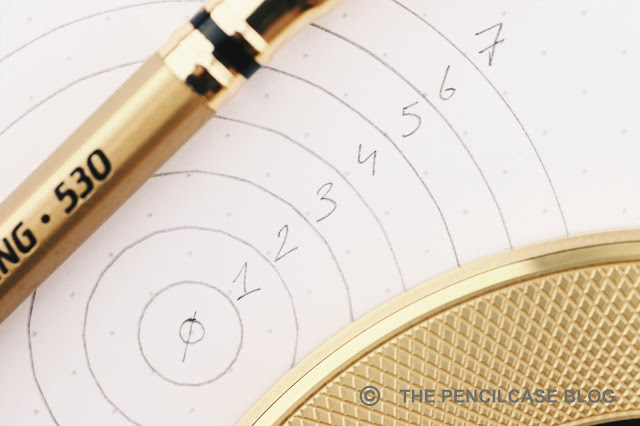 The centimeter scale on the outer edge enables you to precisely draw circles with a defined diameter, or measure them. Talking about that scale: I of course tested the accuracy, and it’s accurate down to a millimeter or so. One slight caveat is that, even though the diaphragm has a lot of rounded blades, you always get a subtly 20-sided circle, not a perfectly round one. At some circle diameters it’s more noticeable than others, though (circles above 5 cm appear perfectly round). With that said, I’d say the Iris is still perfectly suitable for drawing, sketching, or doodling. Anything but precise technical drawing. The rubber padding on the underside of the Iris keeps it firmly in place on the paper, which is necessary as the twist mechanism does require a fair bit of force to operate.
One more thing… Both the Iris and Høvel have a purpose-built walnut wooden base. With the Iris, it’s included in the box (and doubles as a center-point finder when you place it within the Iris). The base for the Høvel, unfortunately, isn’t included and adds an additional 14$ to the cost of the pencil plane. Frankly, I think the base for the Høvel should also be included in the price, as you miss out on a lot of functionality without it. For one, it protects the blade (and also your desk!) when not in use, but it also doubles as a pencil shavings tray, and a holder to place the Høvel upside down to sharpen your pencil with the Høvel on the table  (although I personally find it easier to use handheld). 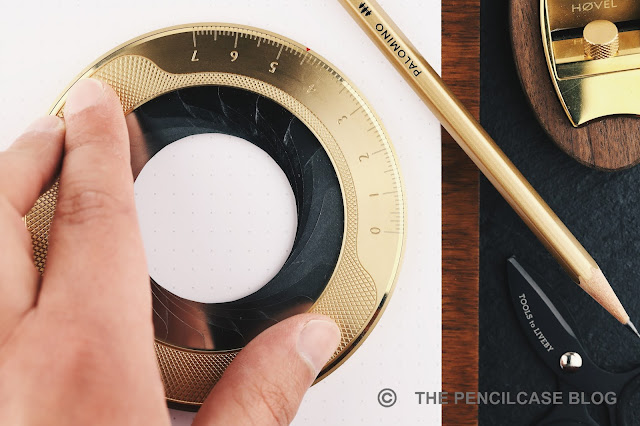 If price is no object, and you want something unique on your desk – certainly a conversation piece -, the Makers Cabinet Høvel (69€/ 80$) and Iris (120€/ 138$) are two tools (because despite the beautiful and unique design, that’s still what they are) that are definitely worth checking out. Build quality is second to none, and I’m sure the Stria ruler and upcoming pencil extender ‘Ferrule’ will hold to the same high-quality benchmark Makers Cabinet has set for themselves.
Better yet – with the upcoming Holiday season in mind – both the Iris and Høvel could make for ideal gifts for the design-minded writing or drawing enthusiasts that already have all the other essentials covered on their desk!
NOTE: These products were provided by Makers Cabinet, so I could write this review. I was in no way influenced in the making of this review, the opinions shared in this review are completely my own. This post does not contain affiliate links. 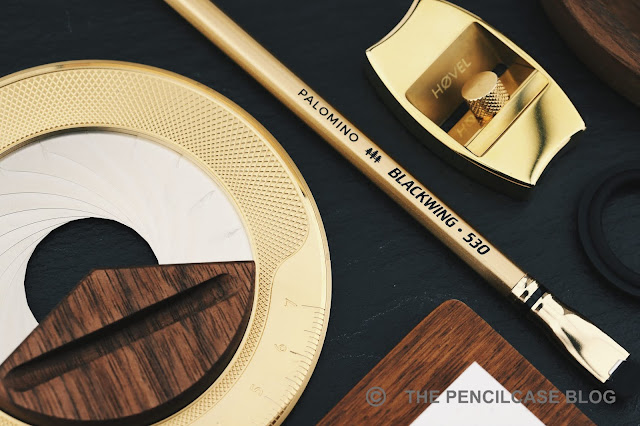 The Transparent Pelikan Fountain Pen came into the world in 1929. One of its most prominent and touted features was a large, transparent ink view chamber. It certainly was a trait that added a lot of convenience and value for the consumer who was able to quickly and easily gauge the amount of ink remaining […] read more

The Best Brush Pens for Calligraphy

You don’t have to be a serious artist or calligrapher to create beautiful script. With a huge variety of brush pens to choose from on our site, we’ve compiled a guide to help you find the best brush pen for calligraphy. Read on to see our top recommendations for brush pens that suit beginners, dramatic lettering, and Asian calligraphy. read more

Like its name suggests, the Kokuyo Campus lineup is geared towards students. However, Campus notebooks, loose leaf paper, binders, and more have become stationery staples for everyone. Whether you’re an undergraduate student or a career professional, the Campus series offers great quality at a budget-friendly price. Read on or watch the video below to learn more about what Kokuyo has to offer. read more

Hi friends! Happy new year! What on earth? How is it nearing the end of January already? I've written 2021 way too many times, despite the fact that it still feels like March 2020. I hope you are all well and safe. I am working on some little things here and there and doing my best to stay sane. Easier said than done, right? Please enjoy a little serious... read more

Despite being incredibly active in releasing new special editions and unique colorways - it seems like every week they make a cool new pen I want! - Leonardo's product catalog is more or less established around two main product lines: the Furore (or Furore Grande), and the Momento Zero (or Momento Zero Grande). Of course, that's not including the handful of limited editions (like the Cuspide, Messenger, or Speranza), though... read more

On deck today is a review of the fresh faced M205 Golden Beryl special edition fountain pen released last month. I have been excited to get my hands on this one and now am happy to be able to give you a closer look so that you might better judge the pen on its merits. […] read more

October is a busy month, playing host to a number of international holidays such as Oktoberfest and Halloween to name just a few. It is punctuated by the crisp fall air, a tapestry of fall foliage, and the scent of pumpkin spice. Perhaps less well known globally is that October is also home to German […] read more

How The New M205 DUO Stacks Up To Its Predecessors

The M205 DUO was originally introduced in 2010 as part of the Classic line, taking the novel approach of combining a fountain pen with a highlighter. The Pelikan brand was no stranger to either product, but this was the first time that they sought to integrate the two. The concept was well received, and the […] read more
Custom MessageSpecial Offer!Buy this Theme!HOT