I’d like to say the Wancher Primo is a strange, unusual pen that I didn’t see coming whatsoever. But then again, Wancher has never shied away from trying new things and stepping out of their comfort zone – like competitively priced Urushi with the Dream Pen (reviewed HERE), or the unique bakelite (!) Seven Treasures fountain pens (reviewed HERE). The Japanese brand has also dabbled in creating a titanium pen before (with the Dream Pen Ti), but it never seemed to have taken off (possibly due to the high price).
With the Primo, however, they’ve approached the concept of a titanium pen from a very different angle. And while I don’t love all aspects about it, Wancher did manage to incorporate quite a few very creative and original ideas! 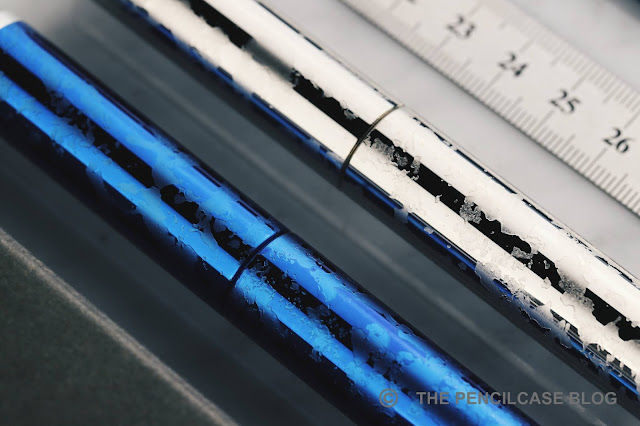 Take it out of the beautiful traditional Japanese wooden box, and the Primo immediately catches the eye with its minimal, quite futuristic, cylindrical shape, and prominent finials in contrasting material. The main highlight is the titanium cap and barrel, which have been sandblast-etched to create a random ‘splattered’ texture, and then anodized in different colors (Midnight Blue, Frosty Silver, Russet Brown, and Amethyst Purple).
The texture is unlike anything I’ve ever seen before. I really like how it creates a visual, as well as tactile, contrast between matte and polished surfaces. 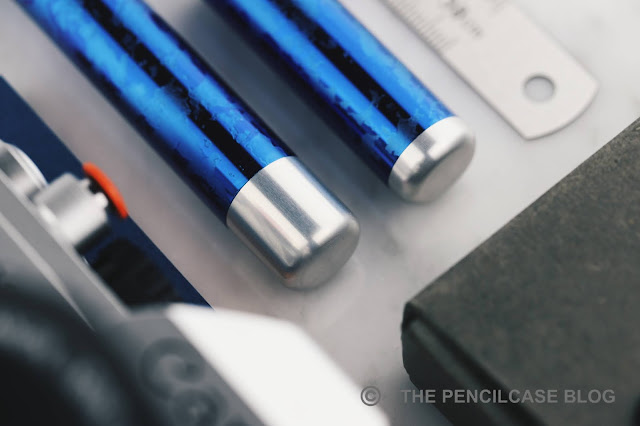 But there are also things about the Primo I don’t understand – And that starts with the finials. Designwise, I’m not fully on board with how the extremely large and prominent finials look. On the Frosty Silver version, the raw aluminum finials blend in relatively well with the titanium parts for a more understated look. On the other colorways, the raw aluminum finials make the Primo look sort of like a clunky magic wand -an asymmetrical one, at that- but that’s of course down to personal taste.
Design reasons aside, the construction of the finials leaves me scratching my head. You see, the Primo is a very stately, bulky pen. It’s also quite heavy (48 grams total). The aluminum section and finials are supposed to help reduce weight, but instead they made the finials so large and solid (they’re barely hollowed out on the inside) that they actually increase the weight! This makes for a pen that’s very noticeably balanced towards the finials, and well… not really all that light. 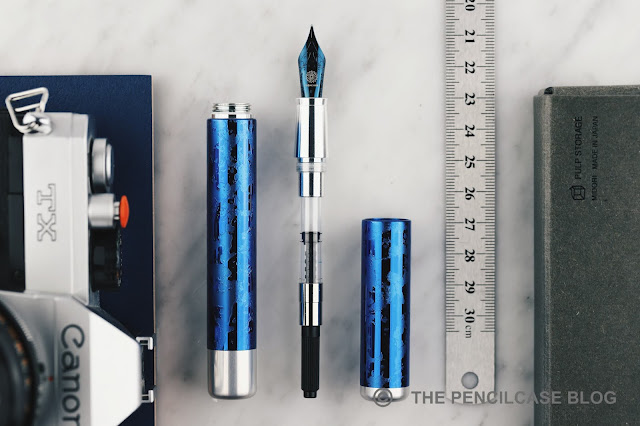 The fact that the finials are so solid on the inside, also means they sort of get in the way of the nib and converter when closing the cap and barrel, respectively. It happens frequently that the nib will catch on the inside of the cap because of this.
That also means there was no space left for a spring-loaded airtight inner cap, despite Wancher equipping most of their other pens with this handy feature. The cap seals off pretty well on its own, but the nib does seem to dry out a bit over extended periods of time, more so than other Wancher pens that do have the inner cap. 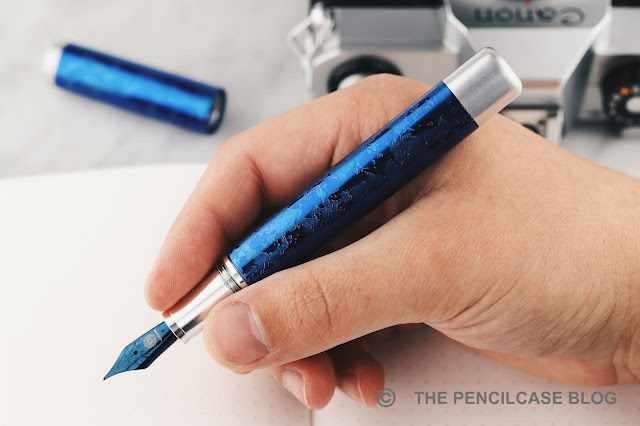 Wancher doesn’t scare away from making quite oversized pens, and the Primo illustrates that quite well. Measuring 14.7 cm (5.79″) capped, and 13.6 cm (5.35″) uncapped, it certainly isn’t small to begin with, yet it’s not quite as big as Wancher’s own Dream Pen, for example. With the Primo, it’s mainly the constant, wide diameter of 1.6 cm (0.63″) across the entire pen, that really creates the oversized impression. 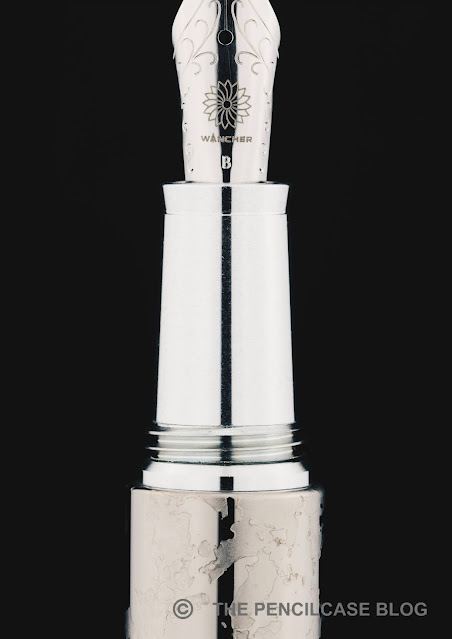 Going from the very wide barrel, there’s a rather large step towards the metal section, which has a diameter of just 1.1 cm (0.43″). The section tapers down further to 1 cm (0.39″), with a short flared section at the end. The design of the section is almost entirely taken over from the Dream Pen (reviewed HERE), which means they deal quite well with the large step. The diameter gradually increases, first up to the threads, then a beveled ring, and finally the rounded edge of the barrel.
There’s one small -but important- detail the Primo didn’t take over from the section design of the Dream Pen: the threads! Unfortunately, they took a step back towards traditional, v-cut threads, instead of the more comfortable and precise block threads from the Dream Pen. The threads are quite deep, which makes them especially noticeably if you hold your fingers on them. Despite the section being quite a decent, comfortable size, it’s not always possible to avoid the sharp threads in your grip. 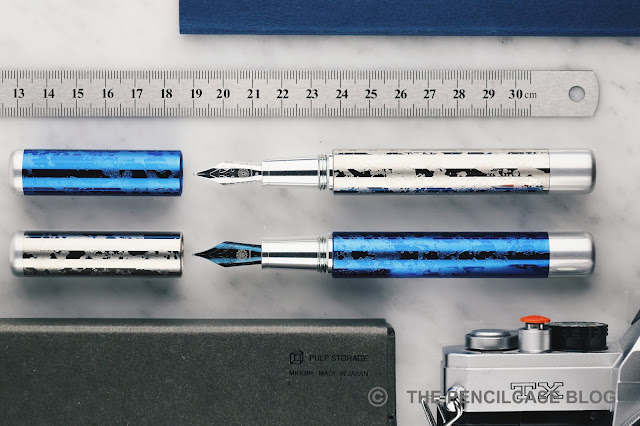 The Primo comes equipped with a steel Jowo nib, but it did receive some (optional) upgrades to make it a bit less ‘stock’ in terms of looks and performance! First of all, the nibs are color-matched to the color of the pen itself. The plating treatment creates a somewhat pearlescent hue on the blue, purple, and brown nibs. The nib on the Frosty Silver Primo received matching rhodium plating instead of the bare stainless steel finish, which creates a brighter and more lustrous look.
Second are the optional ebonite feeds which, as I understand it, are still manufactured by Flexible Nib Factory. Although the two samples I was sent, both came with JoWo’s stock plastic feeds, I’ve reviewed a couple of Wancher’s Dream Pens with the ebonite feeds before, and they’re a great addition to the already reliable writing experience JoWo nibs offer. You can’t really go wrong with any of the feed options, but the ebonite feed (+30$ for black ebonite, +50$ for red ebonite) does give you a noticeably richer ink flow. 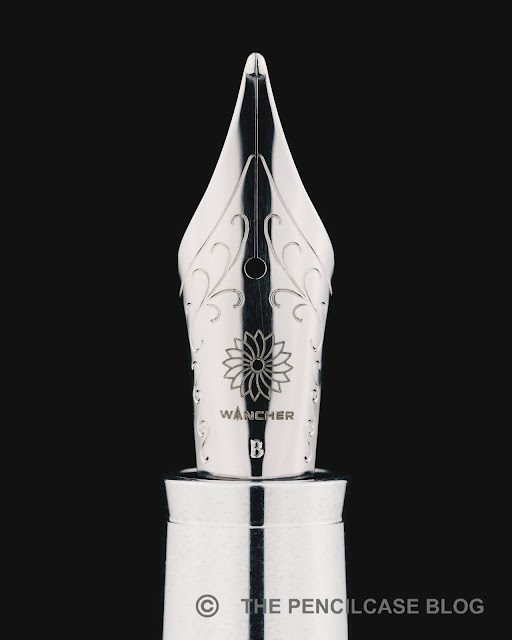 It’s hard to put a final verdict on the Wancher Primo. The Wancher Primo retails for 250$, which is quite steep, especially once you factor in paying an additional 30 to 50 dollars for an ebonite feed.
On one hand, considering the price point of the Primo, I feel like there are a few elements (mainly the clunky finial design and the sharp threads) where I feel like Wancher could’ve done a better job. On the other hand, I do think Wancher absolutely succeeded at creating a unique pen, one that easily catches the eye. Things like the textured barrel and cap, and the color-matched nibs, are perfectly executed and set this pen apart on the market. But on the other hand, I can’t help but feel like Wancher missed the ball on a few particular design decisio
NOTE: This product was provided by Wancher, so I could write this review. I was in no way influenced in the making of this review, the opinions shared in this review are completely my own. This post does not contain affiliate links. 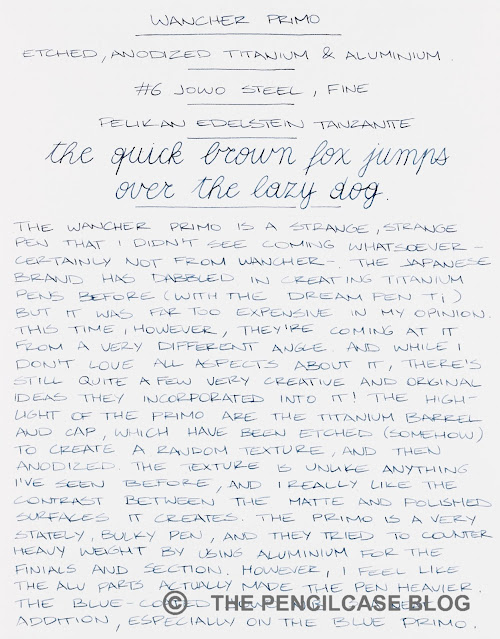 a twsbi 580AL rose gold with an extra fine nib

Last year was the year of rose gold for TWSBI. Ever since they came out with the 580 mini in rose gold a few years ago, I've lusted after a rose gold TWSBI. I put off purchasing one a few years ago because of the reported quality issues but for the rose gold editions of 2020, they reassured customers that the problems had been fixed. So far so good!Today,... read more

My ongoing work as a physician on the front lines of this pandemic and the demands that the most recent COVID-19 surge placed upon me sapped my will, leaving me with precious little time and even less energy for other tasks. Now that we are at the tail end of the Omicron variant’s destructive toll, […] read more

Schneider Rollerball pen One Change – for sustainability in the office 🖋

Early last month, I wrote about a new initiative at Pelikan that would see the long standing translucence of the Souverän’s barrel eliminated. Gone would be the translucent stripes present for the last 40 years of the line’s heritage, exchanged for an opaque replacement. The news took many, myself included, by surprise. Likely motivated by […] read more

Flecks of green, orange AND blue? A wild color choice for someone like me. But oh my, just look at it!How to make a great pen even greater? That's the question Leonardo must've been pondering on. And the answer, as it turns out, is simple: just make it physically 'greater'!Ok, to be fair, it's not that the MZ Grande #8 is effectively a better pen than the regular versions.... read more

Handsome, well made, and surprisingly affordable, every member of the Pilot Metropolitan series is professional enough for the boardroom yet durable enough as a knock-around, everyday writer. The Pilot Metropolitan Fountain Pen is the most famous member of the series, but its gel pen and mechanical pencil siblings are no less impressive. In this guide, we’ll discuss the different types of writing instruments in the Pilot... read more

For those who suffer from tired, fatigued hands, the Dr. Grip is just what the doctor ordered. This high quality writing instrument has an innovative grip design that provides the ideal combination of softness and support. Additionally, the weight balance is optimized for an ergonomic writing experience. To find out more about the different models of the award-winning Dr. Grip, read on. ... read more

When you think high-tech, mechanical pencils are probably not at the forefront of your thoughts. Enter Uni's Kuru Toga—the mechanical pencil that is about to change every last conception you ever had about mechanical pencils. This innovative pencil features a built-in mechanism that rotates the lead in the pencil as you write, resulting in a sharp, crisp line for everything you pencil down. Intrigued? Keep reading... read more
Custom MessageSpecial Offer!Buy this Theme!HOT