how I’m getting on with my bullet journal

how I’m getting on with my bullet journal

Back in November 2020, I talked about three months’ in a bullet journal. I’ve now been using a bullet journal for over a year (how time flies…?!) and I wouldn’t say I’m a seasoned user but like to think I’ve worked out what does and doesn’t work for me now.

The structure is a standard one in terms of a journal – there’s an information page, a year plan, a month spread and the standard weekly spreads. I’ve found a week-to-view an optimal way for me to organise my life and it has worked well for me in the past so I have stuck to it here. From next year, I’m hoping to use a more free-form week to view (more on that in due course).

I’m still in my Leuchtturm 1917 and this is how it’s looking so far. Although month spreads are something that have universally graced my planners year on year, I’ve actually found that I don’t use them that much? A perfect example is June below. You can see just how bare it is and it only has the bare minimum. I’m thinking of doing away with it altogether, however, it’s actually quite a useful way of seeing an overview of how busy the month will be and when my free time will likely be too. Very essential for organising catch-ups with friends and other downtime! Weekly Spreads
I’ve stuck to a fairly basic structure. A column is down the outsides of both pages and to-do lists tend to grace these columns. Some weeks, there’s very few to-dos; other weeks, there’s loads as you can see below.
It’s quite a chaotic spread below but I find it works fine for me. I’m still trying to find the best way to sort my weeks though and the spreads shown here give me a bit of anxiety, purely because of how scatty they look!
Triangles denote events which can vary from meetings to netball commitments to meet-ups with friends. Squares are for actions I need to do and anything else is just whatever I fancy. Although conventional bullet journals suggest using a set code for things like this, I tend to do my own thing. That’s one of the reasons as to why I like the bullet journal system so much. There’s so much room for creativity and also adjusting things to fit my own personality and life. 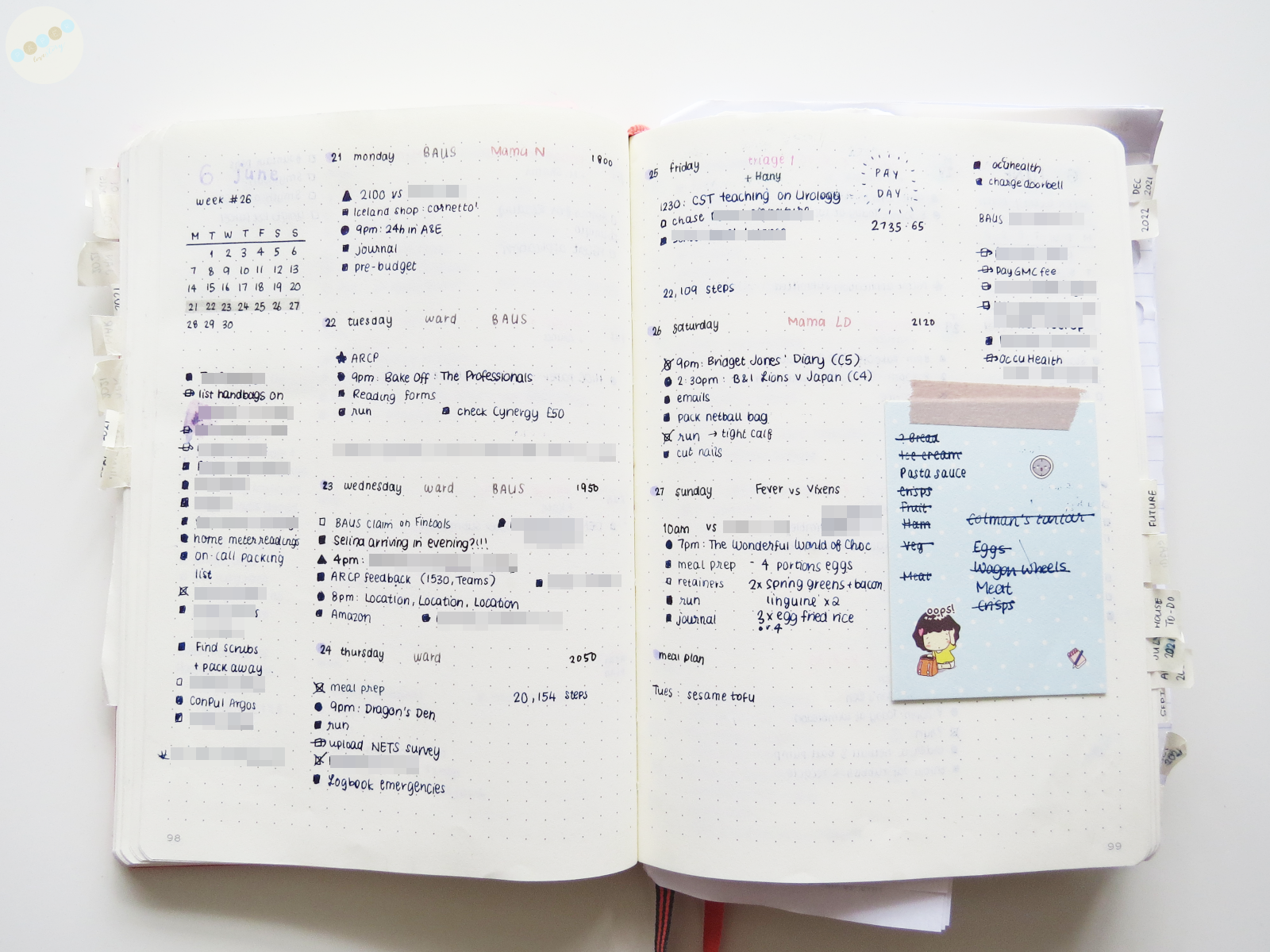 Monthly Reviews
At the end of each month, I sit down and review the things that matter to me.
1. Exercise
To say I’m a little obsessed with exercise is putting it lightly. My sister gifted me an extra MyZone belt system that she had and it’s something we use semi-competitively (she always wins though). A few months ago, I also bought myself a Garmin watch to track my runs and workouts too.
2. One Line A Day
I’m on my third year of a five-year ‘Some Lines A Day’ Leuchtturm 1917 journal. This is a streak I’m determined to continue.
3. Journalling
I try and journal at least twice a week but sometimes, this is more if I’ve had a tough day for example. It’s important for me to brain dump because I often take work home mentally. The other thing is, that it also helps my mental health and keeps things in check.
4. Reading
I’ve not read nearly enough this year and it’s a little disappointing. By having a tracker, this will keep this hobby accountable. There’s always time for a chapter of two of a book (more often more!) and I’m trying to re-discover my reading mojo.
5. Running
I started running properly at the end of December 2020. Although I play a lot of netball, I’ve never described myself as a runner. At first, I could run 3-4km without stopping for a break and now, I can run far further than that. My speed has also improved and I smashed my 5k PB at the end of June! My goal now is to keep up the mileage because after each run, I’ve noticed that my mood is so much brighter and my mental health receives a boost in positive hormones. Overall, the bullet journal system is a good thing for me. I like the freestyle nature and adapting it to my own needs. I also like tracking things important to me so the monthly reviews lend themselves perfectly for that. As mentioned earlier, I’m going to try something slightly different for my 2022 bullet journal and we’ll see how that pans out too. One option I’m considering is combining my bullet journal with my twice-weekly brain dumps in my main journal. This might work as my bullet journal doesn’t leave the house usually so the risk of someone reading a brain dump would be minimal anyway.

Do any of you use a bullet journal? I’m keen to try and go more minimalistic with it so if you’re similar, please do let me know and link me to your own spreads/other spreads you’ve seen that are inspirational.

Hailed by many as the holy grail among gel pens, the Uni-ball Signo gel pen line is lauded for its legendary archival-quality ink and continuous smooth flow. With tip sizes that range from 0.28 mm to 1.0 mm and a vivid array of colors to choose from, it's revered by pen lovers everywhere. Keep reading or watch our Uni-ball Signo Line-up video to learn what sets... read more

Organize busy schedules and plan for the future with a 2022 planner. These indispensable tools come in different formats—such as daily, weekly, and monthly layouts—to best suit your planning style. Read on to see what planners we have available for 2022, including options from Hobonichi, Kokuyo, Leuchtturm1917, and more. 2022 April Start Hobonichi Techo & Kokuyo Jibun Techo ... read more

Despite being incredibly active in releasing new special editions and unique colorways - it seems like every week they make a cool new pen I want! - Leonardo's product catalog is more or less established around two main product lines: the Furore (or Furore Grande), and the Momento Zero (or Momento Zero Grande). Of course, that's not including the handful of limited editions (like the Cuspide, Messenger, or Speranza), though... read more

How to use MOTEX E-404 Embossing label maker

Pelikan got out ahead of their vendors today, taking the opportunity to break the news of their next big fountain pen release via their Instagram account. Rumors about this one started at the end of March and now we finally have our first look at the upcoming M605 Tortoiseshell-Black. This newest M605 takes the iconic […] read more

You Losetime every dip you take with a pen. The remedy is, get a…

You Losetime every dip you take with a pen. The remedy is, get a fountain pen, and while you are at it be sure and get the best.Waterman’s Ideal Fountain Pen is Perfection.For sale by all stationers, most jewelers, and by some specialty houses.L. E. Waterman Co.155 and 157 Broadway,New York read more

Wandering the aisles of your local office supply store, you’re sure to find 0.7 mm and 0.5 mm mechanical pencils. But what if those aren’t what you need? Have you ever thought pencil manufacturers just aren’t thinking small enough? Fine-tip mechanical pencils that write with 0.3 mm and even 0.2 mm leads aren’t likely to turn up on shelves near you, but here at JetPens we... read more
Custom MessageSpecial Offer!Buy this Theme!HOT