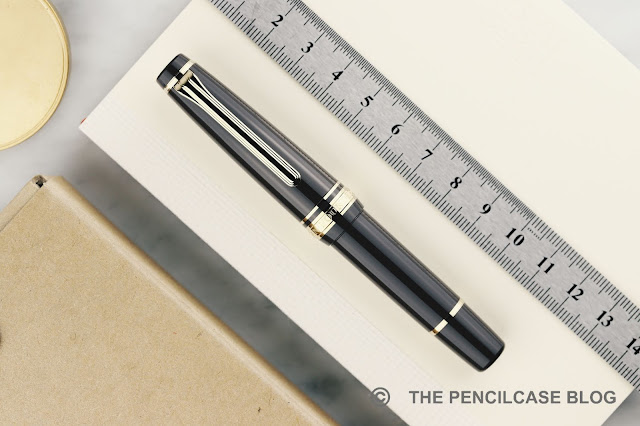 A long, long time ago, years before I started this website, I remember visiting a local pen store in Antwerp, where I spotted a tiny little yellow fountain pen somewhere in the corner of a display cabinet. I knew nothing about it back then, other than that the price tag unfortunately didn’t read 15 but 150 euros (Oops, my mistake!), thus putting it far out of reach for my student budget! The image of that little yellow pen though… that stuck with me throughout the years. And it wasn’t until much later that I realized which pen it was: a Sailor Pro Gear Slim Mini, a rather elusive (outside Japan at least) model that I didn’t come across again ever since that day.
However, Sailor recently decided to push the mini version of their popular Pro Gear model onto the worldwide market once again. So, obviously this time I just had to get my own… Thanks go out to our sponsor Sakura Fountain Pen Gallery, for providing this pen for review! 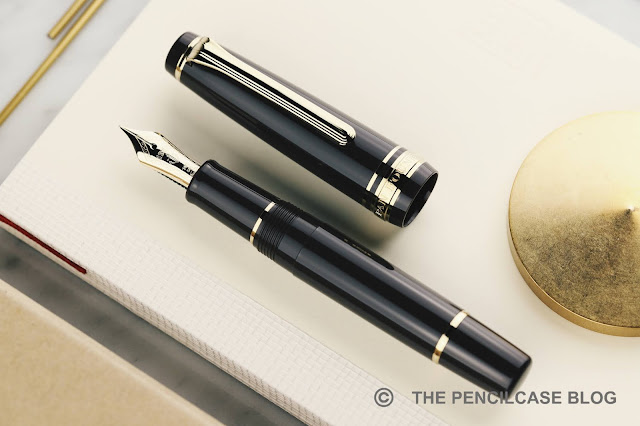 Where to start? Well, I think it’s fair to say that in terms of design you shouldn’t expect any major surprises. For all intents and purposes, the PG Slim Mini is a Slim (‘Sapporo’) model, squished down to roughly the length of a Kaweco Sport. Despite the noticeably distorted proportions, the design remains otherwise identical, retaining the classic flat-top design of the Pro Gear including all ornamental details such as the decorative trim ring behind the section, the ‘staircase’ ridged clip, and anchor logo medallion insert in the cap finial. It’s no less premium-looking than any other Sailor pen, but it does look kind of cute, don’t you think? 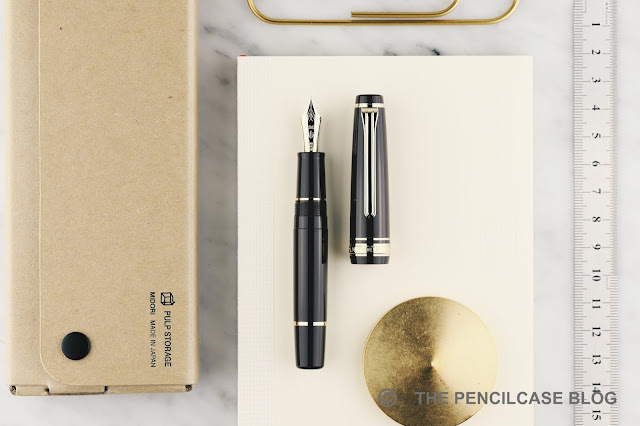 Despite its short presence on the European and American market (only about a year or so since the re-introduction), the Pro Gear Slim Mini already went through a slight design overhaul. It went from having threads on the blind cap to post the cap, to just being friction-fit. I’d argue this change is for the better, as it’s still plenty secure but much faster and easier to post the cap and start writing. It also makes the pen look a bit cleaner, aesthetically. 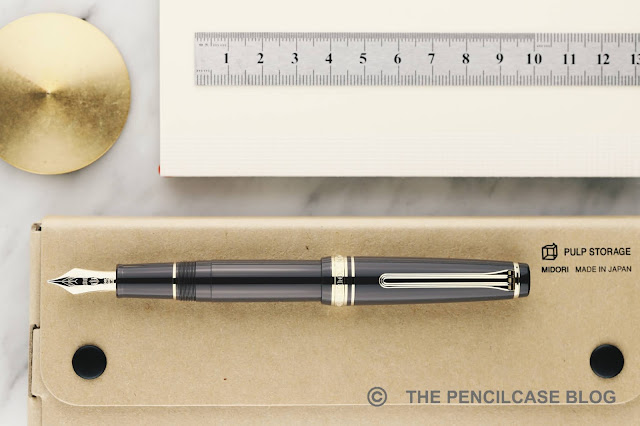 With the slight design change, Sailor also introduced some new colorways for the Mini. Even though I regret that the Mustard Yellow colorway was discontinued, I do appreciate the new, more muted pastel color palette inspired by Moroccan culture. The ‘Puff Brown’ (shown here) colorway is my favorite from the new selection, a nice dark muted brown, very understated and business-appropriate. 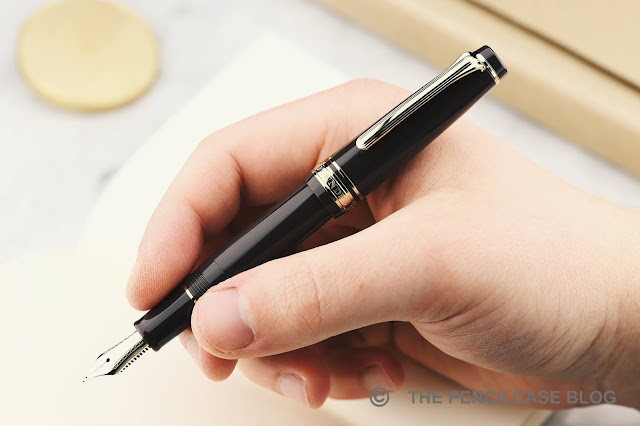 The PG Slim Mini is a true pocket-sized pen, measuring just 10.9 cm (4.3″) capped. Side by side, you can see it’s only a few mm longer than a Kaweco Sport, which is perfect for pocket carry. When posted, the Mini transforms into a not-so-mini pen, 13.6 cm (5.37″) long. But remember that this is really one of those pens that you just HAVE to post for anything but a quick scribble, as it’s a mere 9.6 cm (3.76″) uncapped, even shorter than an uncapped Kaweco Sport!
For such a tiny pen, I was surprised to find that it still weighs in at 16 grams – still very light and nimble for sure, but more than I expected for such a tiny pen. It feels solid in the hand, though of course you’re still dealing with a resin pen… and that immediately brings us to my only gripe with the Mini: it’s not quite the kind of pen I look for when I think EDC or pocket carry. A pocket pen -for me- is a robust, bomb-proof metal pen with an equally sturdy clip – this is not that! Sure it’s probably durable enough to stand the test of time with normal use, but this is not a pen I’ll clip into my jeans pocket. 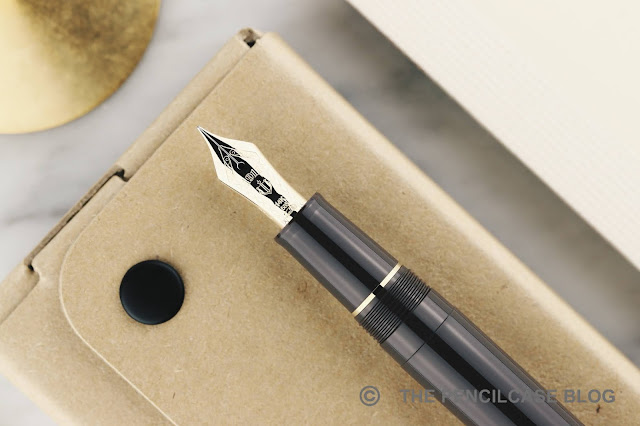 Comfort is sometimes lost on pocket pens, but not with this one. The section leans on the slimmer side, but with an average diameter over 9 mm (0.35″), and no harsh threads or steps in the way of your fingers, it’s a very comfortable pen to hold in the hand. Combined with the excellent size when posted, and the lightweight construction, I don’t at all mind picking up this pocket pen for longer writing sessions!
Since regular converters obviously won’t fit, Sailor went the extra mile to produce a shorter ‘Mini’ converter to fit in this pen… But really, they shouldn’t have. You’ll be paying a rather hefty 8-10€ (about 11$) for one, and the ink capacity is a measly 0.3 mL – less than a third of a Sailor Ink cartridge! 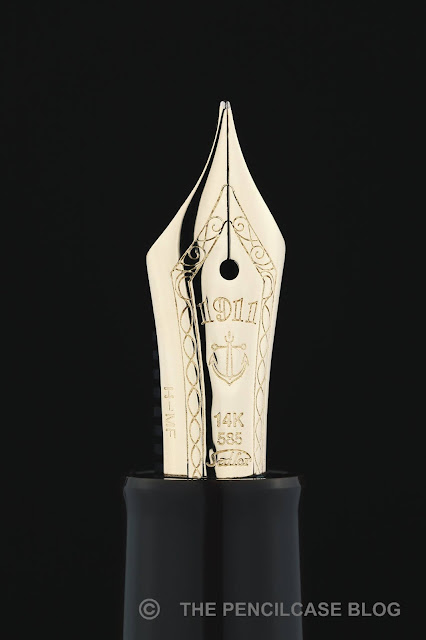 One of, if not THE, selling points of the Sailor Pro Gear Mini is of course its 14k nib. Same as the one found on the Sapporo and 1911S, it’s a small nib (though on this pen it’s very much a proportionate size) with big performance! On the Western market, the Mini only comes in the M-F nib width. Somewhat odd that they’d restrict the nib options like that (of course you could, in theory, swap the friction fit nibs out with other Sailor models), but luckily the ‘Hard’ Medium-Fine continues to hit a sweet spot for my personal writing style. Like all Sailor nibs, it’s a rather firm nib with noticeable pencil-like feedback when you write. The M-F lays down a line closest to a Western Fine with a balanced ink flow -as you’d expect from a Japanese pen- which makes it a rather versatile and well-balanced option for everyday writing IMHO.
From day one, I’ve been enjoying the Sailor Pro Gear Slim Mini an awful lot. Maybe it’s because the small form factor actually is 100% pocket-sized, as opposed to the small-but-not-quite form factor of the ‘full-sized’ Pro Gear and Pro Gear Slim models. Or perhaps it’s because you get one of the best nibs in the game, inside that pocket-sized, EDC-able vessel? In any case, the PG Slim Mini is a great Japanese alternative to the many pocket fountain pens that exist on the market today. Even despite it probably not being my first choice when looking for a pen I can carelessly throw in my pants pocket every day.
Pricing is relatively decent too if you take into account the 14k gold nib! At a retail price of 167€/ 180$ (at our site sponsor, Sakura), it comfortably joins the Lamy 2000 and Platinum 3776 Century on the list of high-quality gold-nibbed pens for under 200$! 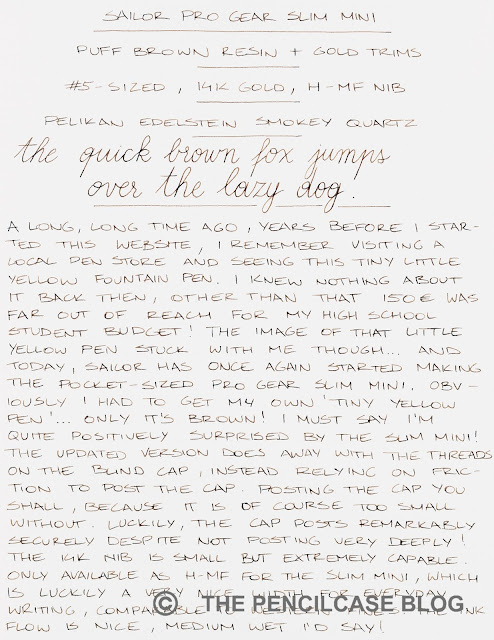 Between August 2019 - August 2020, I managed to use all 300 pages of a Katie Leamon lay flat notebook. You can see my initial post about it here and how it ended up here. Later on in this post, you'll see it even more battered than before. Since then, I've added another three to my collection and they all complement each other nicely in design. Ultimately, I think they are... read more

PayPal.me/gourmetpensgourmetpens@gmail.comBody BraveOpus 88 Koloro Demonstrator Gourmet Pens ExclusiveRickshaw sleevesBrowse the shop!If you enjoy and/or appreciate and you want to lend your continued support, please do check me out on Patreon. You can pledge your support and/or undying love for as little as $1. You are in no way obligated to do so. I appreciate your readership, viewership, and your support so much - thank you!  read more

Whether old or new our pens are precious things. We either buy the best we can or restore to a high standard. Many of us have our collections on show under glass. Even those who buy old pens to write with keep them in good order and take pride in them. It was not always […] read more

It is hard to believe that 2021 is just two weeks away from drawing to its close. Not only is another disjointed and surreal year ending but it seems like the long shadow of the coronavirus pandemic will carry well into 2022. To counteract the doldrums of the pandemic, many have sought refuge and solace […] read more

Thank you, Candace - Inks and Anchors on Instagram - for lending me this pen for so long!If you enjoy and/or appreciate and you want to lend your continued support, please do check me out on Patreon. You can pledge your support and/or undying love for as little as $1. You are in no way obligated to do so. I appreciate your readership, viewership, and your support so much -... read more

Handsome, well made, and surprisingly affordable, every member of the Pilot Metropolitan series is professional enough for the boardroom yet durable enough as a knock-around, everyday writer. The Pilot Metropolitan Fountain Pen is the most famous member of the series, but its gel pen and mechanical pencil siblings are no less impressive. In this guide, we’ll discuss the different types of writing instruments in the Pilot... read more

The legend of the Blackwing exceeds the reputation of any other pencil. Its exceptional balance of softness, darkness, and sharpness, set off by an elegant ferrule and replaceable eraser, makes it instantly recognizable and highly addictive. Celebrated authors, musicians, and artists declared that they could not work without the original Blackwing after it was discontinued in 1998. The revived family of Blackwing pencils and companion products... read more
Custom MessageSpecial Offer!Buy this Theme!HOT