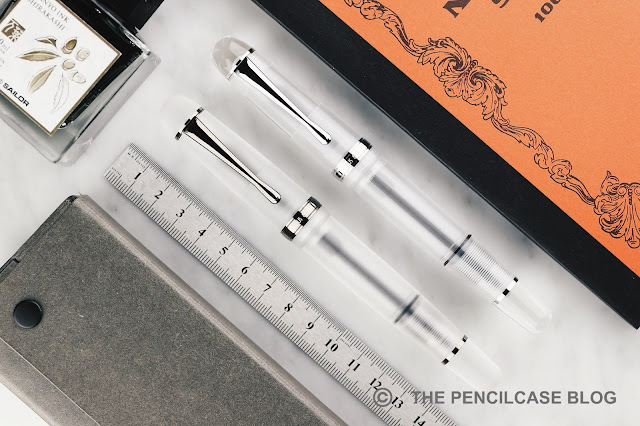 No matter how many Opus 88 pens go through my hands, time and time again I’m impressed with their fun designs and impeccable quality! I particularly enjoy seeing their demonstrator models whenever they come up with a new model, those always inevitably pop up, though sometimes only after a while.
In the case of the Opus 88 Jazz, it took them a short while to move on from the translucent tortoiseshell acrylics they first released this model in, but they did make up for the lost time by immediately releasing two demonstrator versions instead of one: The Opus 88 Jazz ‘Clear’, and the frosted Jazz ‘Holiday Clear’! My thanks go out to Opus 88 for sending me both pens to check out! 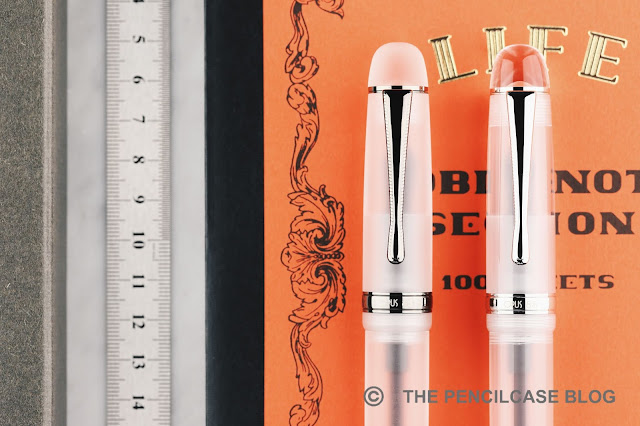 The Design of the Jazz is possibly one of the most ‘classic’ approaches to a fountain pen that we’ve seen from Opus, yet. It takes after traditional cigar-shaped pens, with a slightly tapered bulbous shape and large rounded finials. In fact, it has some likeness to the Penlux Masterpiece Grande I reviewed not too long ago (HERE).
The Jazz features a bit more ornamental trims than you typically find on an Opus pen, with a decorative band on the cap, above the clip (separate from the ring that actually connects the clip to the cap) and above the blind cap. 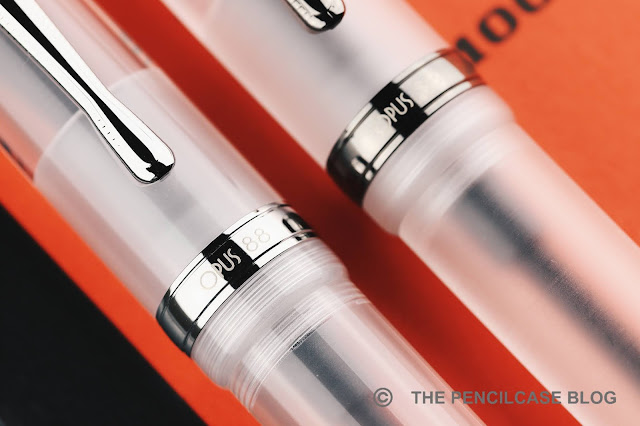 The rounded center band is a new addition for Opus 88, and its minimal logo engraving perhaps looks a bit empty on the standard opaque colorways of the Jazz – but it does match to the clean look of the demonstrator versions, I find. The teardrop-shaped clip with knurled sides makes its return from one of the first pens that kicked things off for Opus, the Koloro. 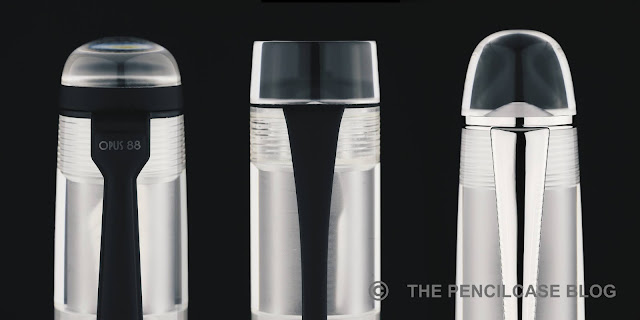 I firmly expected Opus to follow their current trend of releasing demonstrator pens with matte black trims, but the Jazz is the exception to that rule, with standard silver-colored trims. This once again adds to the more classic design of the Jazz, and it’s not a bad choice IMHO, if not that it does make it the odd one out when put next to the Demonstrator and Omar Demonstrator. 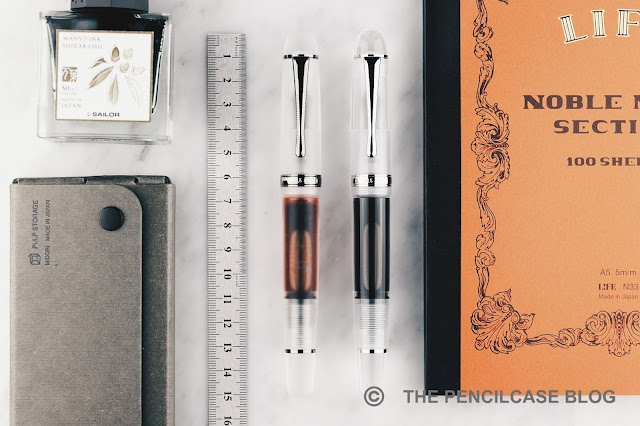 The Jazz ‘Holiday Clear’, which is the frosted/matte version of the Jazz demonstrator (I don’t quite understand the reasoning behind the name?) gets ruthenium-colored trims – though polished, so still not quite like the matte black trims of the other Demonstrator pens. All demonstrator pens from Opus already come with frosted innards, though the addition of a matte finish on the outside gives the Holiday an even more uniform and opaque look, contrasting strongly with the polished, dark trims. Of course, the biggest difference is how the Holiday Jazz FEELS in the hand, the soft matte surface texture sets it apart completely from the other versions. The matte finish is quite uniform across the entire pen, living up to the excellent construction standards of Opus, once more. It’s no secret that Opus 88 likes to create large -very large-, oversized pens, so it’ll come to no surprise that the Jazz is also a very big pen. Though, even besides the already large Demonstrator and Omar, the Jazz is still a decent bit longer. Strangely though, because of the more streamlined design, it doesn’t feel too big (though of course that boils down to personal preference!).
At 15.1 cm/ 5.95″, it’s unapologetically oversized, though, that’s more or less a given with Opus. Without the cap, you’re left with a pen that’s 13.3 cm/ 5.24″ long, which is more than comfortable for even a large hand. If you’re feeling adventurous, you could still post the cap, though it doesn’t post awfully deep so you’ll end up with a ridiculously long pen! At 28 grams, the Jazz is surprisingly quite a bit lighter than the smaller Opus 88 Omar.
The section design of the Jazz is again (almost) identical to those on a lot of their other pens: a decently sized section with a nicely pinched taper that transitions smoothly into the threads. There’s a bit of a step behind the threads and it can be quite sharp depending on how you hold the pen, a bit unfortunate on an otherwise very comfortable pen!
Interestingly, despite the Jazz being the largest of the three, it still loses to the Demonstrator and Omar when it comes to ink capacity. You can actually see that the barrel part of the Jazz is noticeably shorter, likely due to the proportions of the pen. Now admittedly, 3 mL is hardly anything to scoff at, but it is indeed less than the 3.5mL of the other two models. The Japanese eyedropper filling mechanism continues to be a fantastic trade-off between huge ink capacity, while still keeping a practical advantage over traditional eyedroppers. 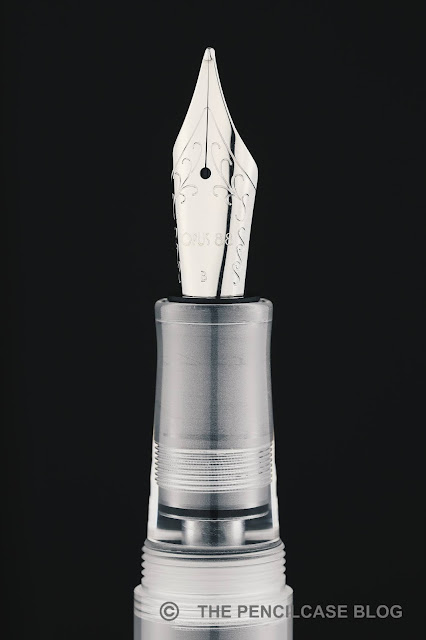 Compared to the last Opus 88 pen I reviewed -the Opus 88 Flow-, the Jazz returns to the camp of JoWo for the nib choice (in fact, all demonstrator models so far have exclusively used JoWo nibs). An excellent nib choice that also implies that this pen should be suited for conversion to a Pilot parallel nib (a fun feature I’ve discussed extensively in my review of the Omar). The broad nib I tested on the Jazz Clear worked flawlessly out of the box, and pairs great with the large ink capacity Japanese eyedropper. 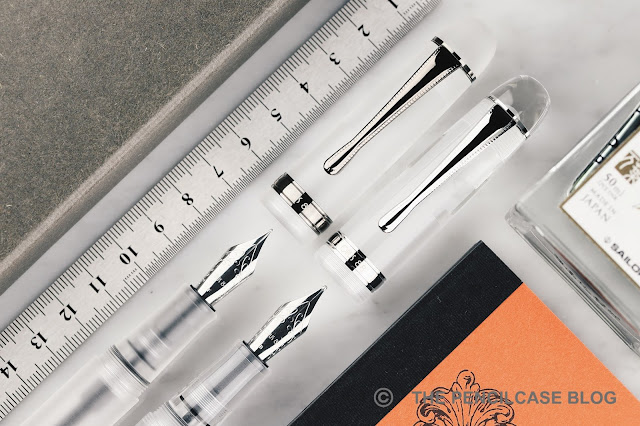 The Opus 88 Jazz takes all the elements that I’ve liked before -and continue to like- about Opus’ oversized, demonstrator, Japanese eyedropper-filled fountain pens, and crams it into a design that’s actually remarkably traditional and ‘normal’ (for their doing). Their interpretation of a classic cigar-shaped fountain pen works well, even though it’s not quite as eye-catching as the more unique styles of the Omar, Flow, or Bela. It’s an inoffensive design and it works especially well in these two clear demonstrator finishes. As always, one of the main reasons of appeal for me continues to be the competitive pricing of Opus pens: for 108€/ 104$ (at site sponsor Appelboom, use discount code ‘friend’ for 10% off!), you really do get a whole lot of pen for your money!
Note: This product was sent by Opus 88, so I could write this review. I was in no way influenced in the making of this review, the opinions shared in this review are completely my own! This post does not contain affiliate links. 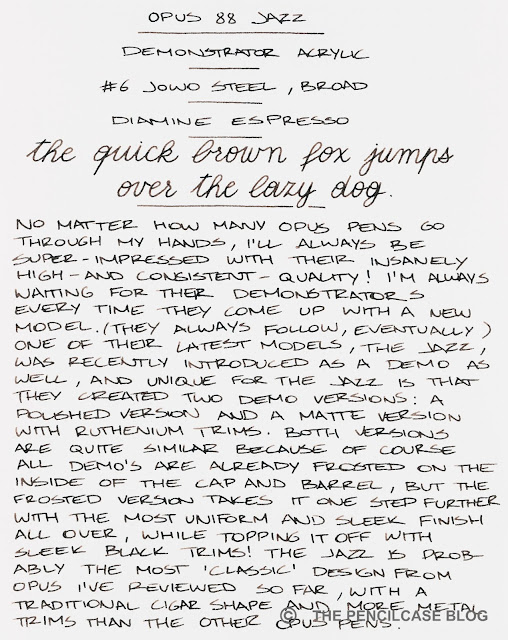 As much as I love that bullet journaling requires the bare minimum of materials (a notebook and pen is enough!), I'm someone who likes to have a few more things to make my 'bujo' that bit more neat and reflective of my personality. My bujo arsenal now looks as follows...PaperMy first bujo was a Papier one, my 2021 one was a Leuchtturm and this year, I've opted for an Ottergami one... read more

October is a busy month, playing host to a number of international holidays such as Oktoberfest and Halloween to name just a few. It is punctuated by the crisp fall air, a tapestry of fall foliage, and the scent of pumpkin spice. Perhaps less well known globally is that October is also home to German […] read more

If you hate the sound of singing nibs, click away! This fountain pen is a Pelikan Souverän M1005 with a oblique triple broad nib. Inked with Robert Oster Sydney Lavender Purple.If you enjoy and/or appreciate and you want to lend your continued support, please do check me out on Patreon. You can pledge your support and/or undying love for as little as $1. You are in no way obligated to... read more

The Transparent Pelikan Fountain Pen came into the world in 1929. One of its most prominent and touted features was a large, transparent ink view chamber. It certainly was a trait that added a lot of convenience and value for the consumer who was able to quickly and easily gauge the amount of ink remaining […] read more

Sulfur is a luxury writing instrument from the Constellations88. Sulfur is Hand Crafted Fountain Pen by Indian Craftsman with high... read more

This pen was advertised as green marbled, something you don’t find among Swan Minors. The photographs were no help but I placed a bid anyway. I got the pen and when it arrived it turned out to be Marine Bronze which, admittedly, has some green in the mix. Marine Bronze is a mixture of russet […] read more

Whether you’re a student, a fountain pen lover, or simply curious about good paper, Japanese notebooks will ease difficulties with writing you didn’t know you had. Centuries of papermaking and high standards for design make for notebooks that are leaps and bounds beyond the blue-lined spiral-bound ones you might grab from an office supply store. To learn more about the incredible variety and impeccable quality of... read more
Custom MessageSpecial Offer!Buy this Theme!HOT