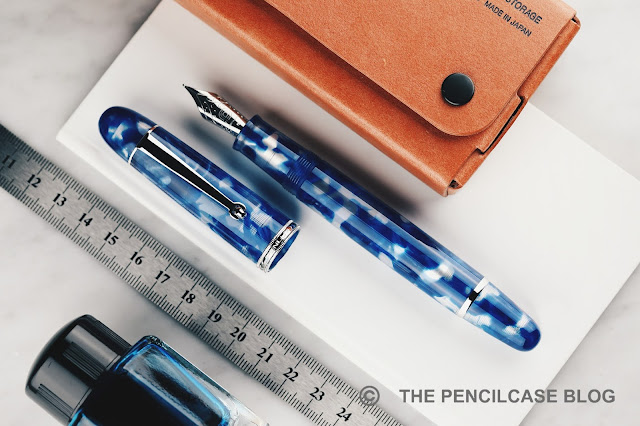 After a ridiculously long detour through customs – to the point where it was ‘lost’ by Belgian post for four months – I finally have my hands on a pen from Taiwanese manufacturer Penlux – a brand that has slowly been making name for themselves, but they’re still surprisingly difficult to come across in Europe. I was quite excited to check out Penlux’s Masterpiece Grande, especially since Taiwan has a rather excellent track record in my book: brands like TWSBI, Opus 88, Ystudio,… they’re doing quite excellent things over there! My thanks to Penlux for sending this pen over for review! 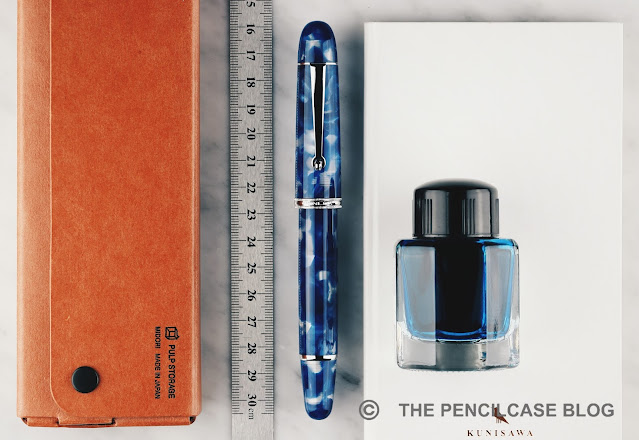 At first sight, the design of the Penlux Masterpiece Grande shows a striking resemblance to the Montblanc Meisterstuck (Meisterstuck = Masterpiece!) 149 (reviewed HERE). Though the longer I looked at it, the more I found it to be closer related to Italian design language, with the rolling-ball clip (a very sturdy and practical one, I must add), a rather eccentric center cap band (more on that later), and a wide variety of colorful and original acrylics to choose from.
Yes, in shape and overall dimensions, it does lean somewhat close to the 149. But putting those two pens side by side, you do notice that the Masterpiece has a less pronounced ‘bulbous’ and tapered shape like the MB 149, going instead for a more torpedo-like shape and more rounded cap and barrel finials. There’s also a rather large decorative ring at the piston knob, which hides away a small step from the barrel to the piston knob. 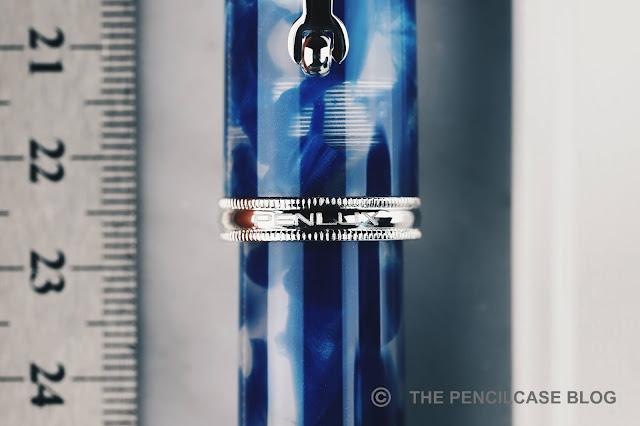 Coming back to the cap band, this is without a doubt the centerpiece of attention on this pen. Not only because of how it looks but also the way it coincides with a rather extreme ‘break’ between the cap and barrel. It’s a single, wide, band with knurling along the top and bottom edges, and the word “PENLUX” engraved in between. The center band could be categorized as gaudy, but I personally quite like the looks and the texture of the knurling. Interesting about the abrupt step towards the barrel is that a few specific colorways (black and blue swirl) have a slightly different cap design with an additional acrylic ring that tapers down towards the barrel – it would’ve been nice if they continued that design in all versions of the Masterpiece Grande. 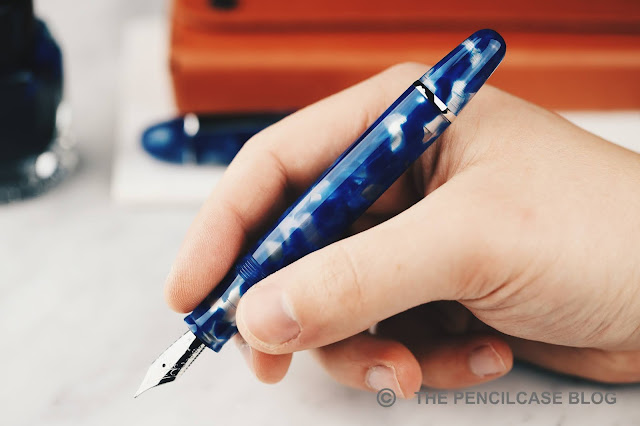 The Masterpiece Grande’s torpedo shape has quite a strong resemblance to Montblanc’s 149, and as the ‘Grande’ in the name suggests, it’s no less statuesque in size, compared to the MB – quite the contrary. The Masterpiece Grande measures 14.8 cm/ 5.85″ capped, and retains a rather generous length when uncapped: 13.3 cm/ 5.24″. Though its bulbous, torpedo shape is perhaps a bit less pronounced than that of the 149, it is still a considerably wide pen, especially at the cap (which is quite a bit wider than the barrel). The entire pen weighs about 33 grams, which is very comparable to alternative pens of a similar size. 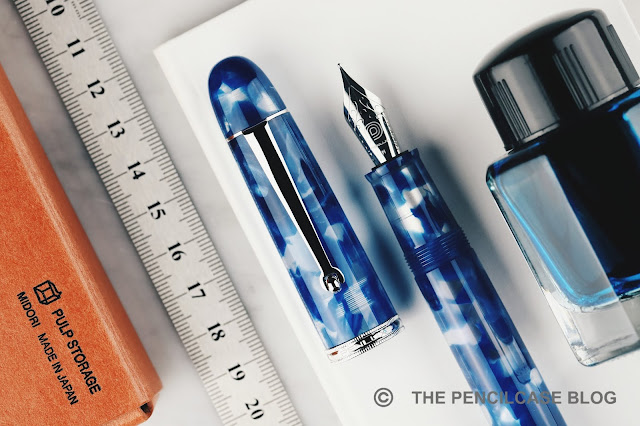 Uncapped, the Masterpiece Grande shows all the elements that make for a comfortable writer: The section has a slight taper to it, but retains an overall fairly wide diameter (about 12 mm/ 0.47″ on average), providing a secure grip. The transition to the barrel is imperceptible, with only the threads maybe being slightly noticeable under your fingers. With its 13.3 cm uncapped, it’s comfortable and plenty long in the hand – though you could post if that’s what you want (I certainly never felt the need to do so).
The ‘Koi’ material (available in blue or black) adds to the Masterpiece a fantastic flecked, semi-translucent acrylic material, which shows perfectly how precise the machining and finishing is, also on the inside (a consistency across many Taiwanese brands, I have found!). Talking about machining excellence: the Masterpiece Grande comes with an in-house-made, fully metal (aluminium) piston mechanism. The mechanism feels extremely solid, yet it’s also smooth and cushioned to operate. Ink capacity is perhaps a bit disappointing for such a large pen though, coming in at just 0.9 mL. 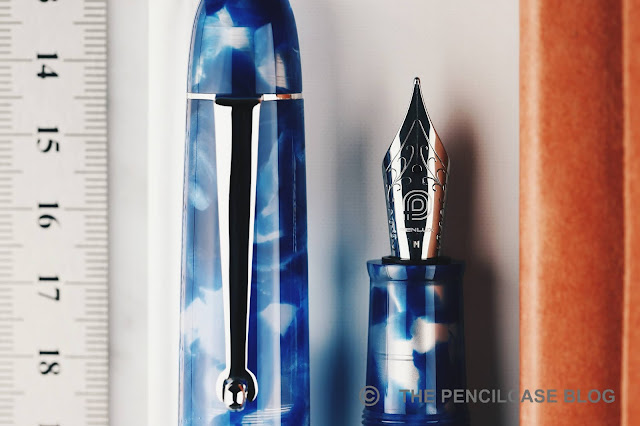 There’s one interesting quirk about the piston mechanism, which is – as mentioned – machined out of aluminium. The rubber seal just covers the sides of the piston, against the inner walls of the barrel, but leaves the top of the aluminium piston rod exposed (as far as I can tell). Now, aluminium’s naturally forming oxide layer offers quite capable protection against corrosion (contrary to steel, where the oxide layer doesn’t protect the underlying metal, causing it to rust indefinitely). But in contact with liquids, that natural corrosion resistance is quite a bit less effective, especially with inks often having a pH outside the neutral(-ish) range (more acid or base)!
How well the piston mechanism will stand the test of time, is something I can only take a guess at. I did see some discoloration of the white rubber seal (could be degradation due to surface contact with the aluminium parts) but haven’t had any functional issues to speak of so far (mind you, I’ve had this pen inked non-stop for about 3 months at the time of writing!) 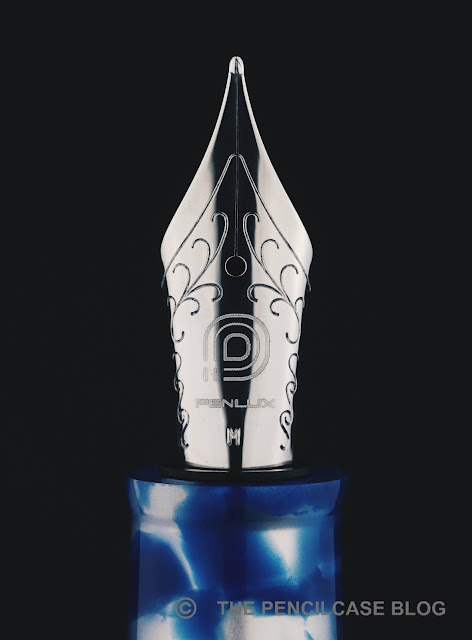 The #6 Jowo nib is a standard-issue example from the German nib manufacturer. Aesthetically, the nib does look quite small on such an imposing pen, but it’s not uncommon to see #6 nibs on really oversized pens these days (especially because the nib alone would probably double the cost!). Standard issue or not, JoWo of course makes excellent pieces of writing steel, and the Penlux Masterpiece Grande perfectly illustrates this with a buttery smooth medium that has a rather rich – but most importantly consistent – ink flow.
I think it’s fair to say that with Penlux, another excellent name gets added to the growing list of quality Taiwanese brands to follow! The 192$ price tag (based on a handful of mostly US-based retailers, I didn’t find any European retailers that stock Penlux – yet) of the Penlux Masterpiece Grande Koi – some of the other colorways come in a bit cheaper – gets you a well-rounded, flawlessly constructed pen, and another excellent option for those that like oversized pens.
Note: This product was provided by Penlux so I could write this review. I was in no way influenced in the making of this review, the opinions shared in this review are completely my own! This post does not contain affiliate links. 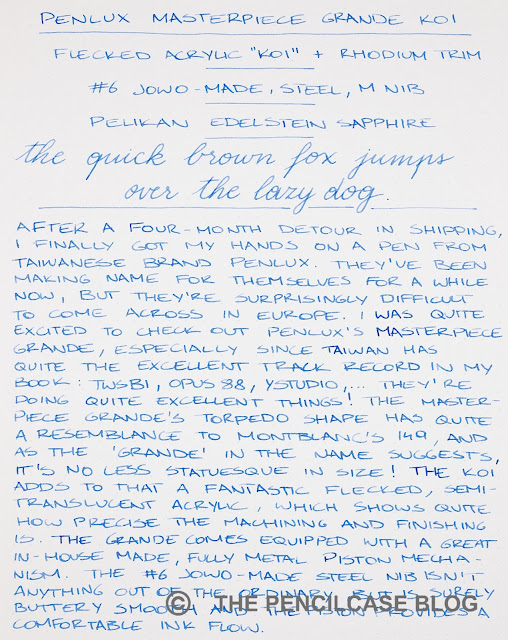 Fountain pens are simply unlike other writing instruments. Their vintage appeal and distinctive nibs already set them apart, but many manufacturers have taken the opportunity to make their fountain pens stand out from the rest of the pack. In this guide, we shine a spotlight on unique fountain pens that have noteworthy materials and nibs. read more

As expected, the reintroduction of the Parker 51 caused quite a stir within the community. It took me quite a while to get my thoughts about it in line, but I think -perhaps somewhat unexpectedly- my overall impression of the new version is quite a bit more positive than you might expect. I actually think it's a pretty successful hommage to the original in many (not all) ways. This... read more

When you think high-tech, mechanical pencils are probably not at the forefront of your thoughts. Enter Uni's Kuru Toga—the mechanical pencil that is about to change every last conception you ever had about mechanical pencils. This innovative pencil features a built-in mechanism that rotates the lead in the pencil as you write, resulting in a sharp, crisp line for everything you pencil down. Intrigued? Keep reading... read more

Thank you to Appelboom for loaning me this pen - ages ago. Sorry. But you can find other Platinums at Appelboom!Here's the Platinum nib set video!If you enjoy and/or appreciate and you want to lend your continued support, please do check me out on Patreon. You can pledge your support and/or undying love for as little as $1. You are in no way obligated to do so. I appreciate your... read more

A Guest Post From Chloé: My First Pen Restoration

‘Your first?’ regular readers of my blog will ask in a surprised fashion – yes! While I regularly completely disassemble, clean and polish pens, I only bought the parts to repair some three days ago. Once the sacs and shellac that I needed had arrived (yesterday, as Vintage Pen Parts were startlingly efficient) I immediately […] read more

The legend of the Blackwing exceeds the reputation of any other pencil. Its exceptional balance of softness, darkness, and sharpness, set off by an elegant ferrule and replaceable eraser, makes it instantly recognizable and highly addictive. Celebrated authors, musicians, and artists declared that they could not work without the original Blackwing after it was discontinued in 1998. The revived family of Blackwing pencils and companion products... read more

Hailed by many as the holy grail among gel pens, the Uni-ball Signo gel pen line is lauded for its legendary archival-quality ink and continuous smooth flow. With tip sizes that range from 0.28 mm to 1.0 mm and a vivid array of colors to choose from, it's revered by pen lovers everywhere. Keep reading or watch our Uni-ball Signo Line-up video to learn what sets... read more
Custom MessageSpecial Offer!Buy this Theme!HOT