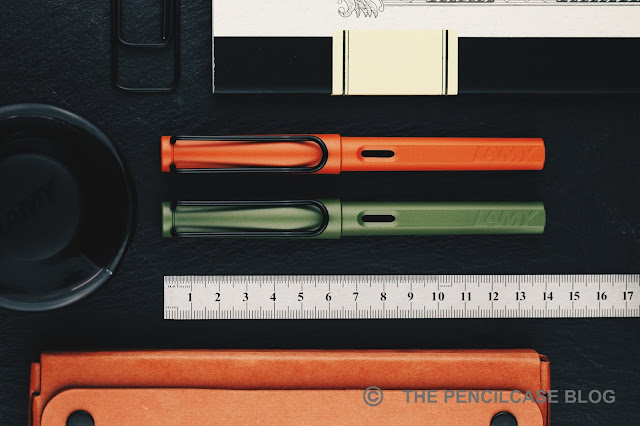 In the almost 8 years of existence of this website, I seem to have succeeded at – subconsciously – ignoring one of the most ubiquitous and widespread ‘beginner’ fountain pens on the planet: the Lamy Safari.
Ok, I have done ‘quick look’ posts on some of the previous special editions throughout the years, but I’ve never actually made a complete and in-depth review about it. Despite that, the Lamy Safari has played an immense role in my pen journey throughout the years (and still does so today, as my father and I share a mutual hobby of collecting old special edition Safaris!), and it embodies a lot of what I seek in a true ‘workhorse’ pen. I guess, because it’s so ubiquitous, the Safari is just a pen I’ve always taken for granted.

So today, while we take a look at 2021’s Terracotta and Savannah special edition Lamy Safaris – two colors that immediately got me very excited! – I’ll go a bit more in-depth on why I like this pen so much. Before we dive deeper into some of the details of the new Safari special editions, I’d like to thank sponsor of the blog, Penworld, for providing these pens for review!

Let’s start at the beginning: the Safari is a textbook example of a love-it-or-hate-it design, but that’s also what makes it so interesting. The Safari goes at the Bauhaus design with an extra dose of brutalism and modernism (strong Oscar Niemeyer vibes) added to the mix: pronounced flats and angles, exaggerated proportions,… 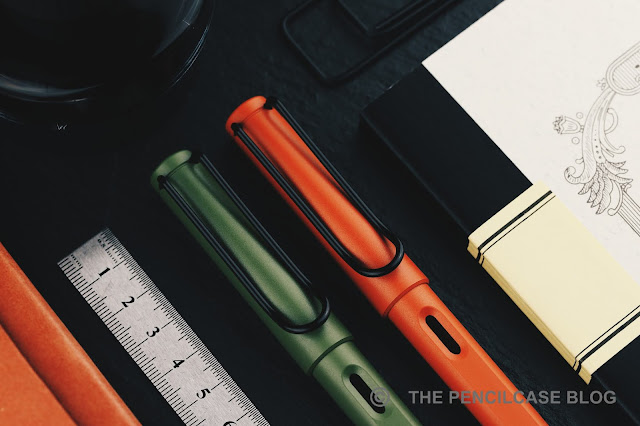 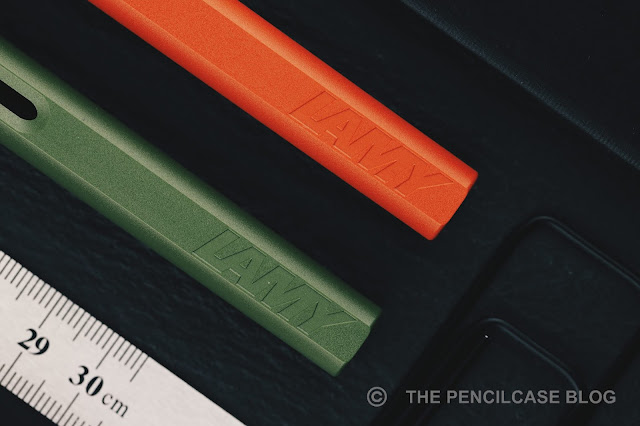 … and in-your-face branding on the back of the barrel. And yet, somehow, there’s something strangely attractive about it. 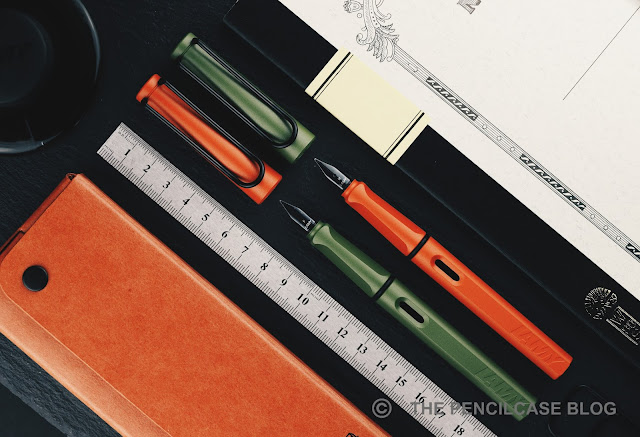 The Safari has of course seen every single color of the rainbow over the years, but only two are true grail pens for the wintered Safari collector. Like so many Lamy Safari aficionados, my dad and I never found the two OG Lamy Safari colorways, Savannah and Terracotta (the two original colors released in 1980). To be honest, they may be a bit too grail-like, as prices for the original Savannah and Terracotta go insane on the second-hand market. That is, if you’d even find one for sale! Against all odds, Lamy seems to have actually listened to what the pen community wanted to see, so I’m VERY excited to see a re-release of the Savannah and Terracotta. Heck, for once they might really be listening, as we even saw rumors of a new colored 2000 (though I’ll refrain from getting too excited about that just yet… they can still botch it like they did with the Bauhaus release!).
The argument you can hear left and right that this re-release will have a negative impact on the collectibility of the highly sought-after originals? I don’t think so. True collectors will know how to spot the differences (‘Germany’ marking on the bottom, slightly different finial, etc), and the originals are so hard to find, I think this will just create even more awareness and demand to track those down…
In terms of how close the colors actually are to the originals? Well, I – unfortunately – don’t own any of the originals, but from the few comparisons online, it seems that the Terracotta is quite spot-on, while the Savannah looks to be a touch less olive-green than the original (though in real life, it certainly looks olive-green to my eye). 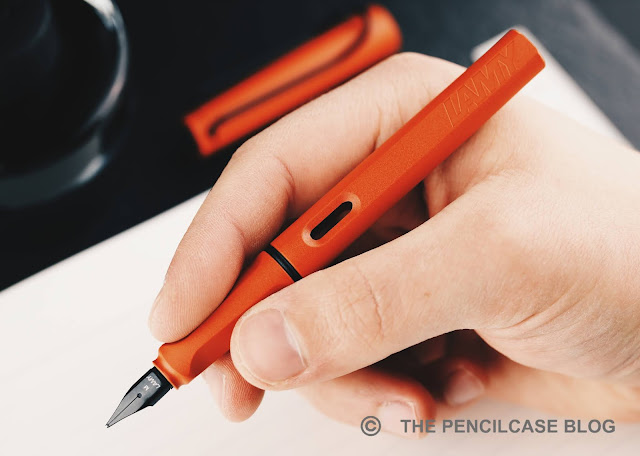 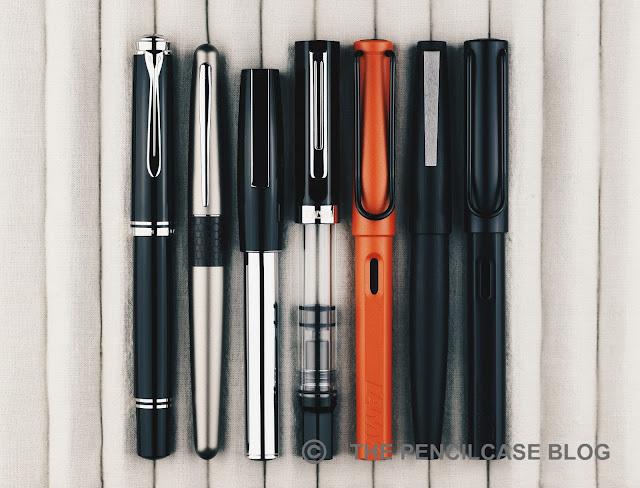 The Safari is a medium-sized pen, fitting in perfectly with some of my other favorite starter pens, like the Pilot Metro, and TWSBI Eco. The Safari measures just shy of 14 cm/ 5.5″ capped, and retains a comfortable size of 12.9 cm/ 5.1″ when uncapped. It weighs just 17 grams in total, thanks to the all-plastic (ABS), injection-molded construction. The cap posts securely and rather deep (it covers the entire ‘LAMY’ logo), which – together with the light weight – makes this one of the more comfy pens to use posted. 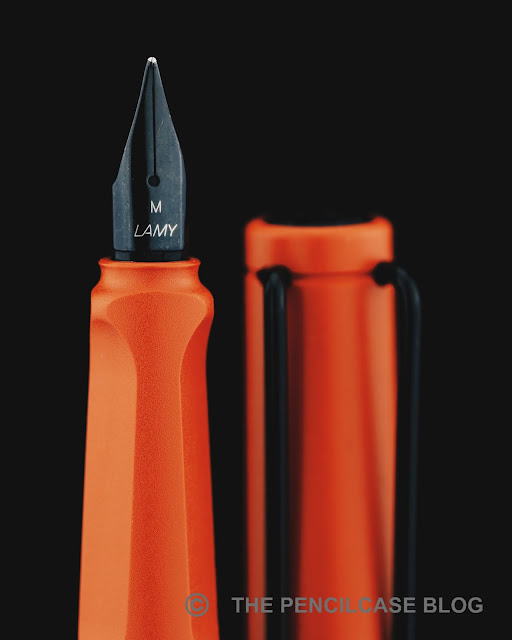 The section is nice and long, and transitions seamlessly (well, not seamless, but without a step… You get what I mean!) into the barrel. The diameter of the section is a bit tricky to translate into numbers, but it roughly tapers from 12 to 10 mm towards the nib. Talking about the section: just like the general design of the Safari, the section is quite controversial.

The pronounced triangular profile definitely favors a more ‘traditional’ tripod grip, so that’s certainly something to keep in mind if you tend to hold your pen in a funky way. With my – fairly standard – grip, the Safari has always clicked very well. Even though shaped grips are typically regarded as a beginner feature, I still enjoy the controlled and precise grip it provides. 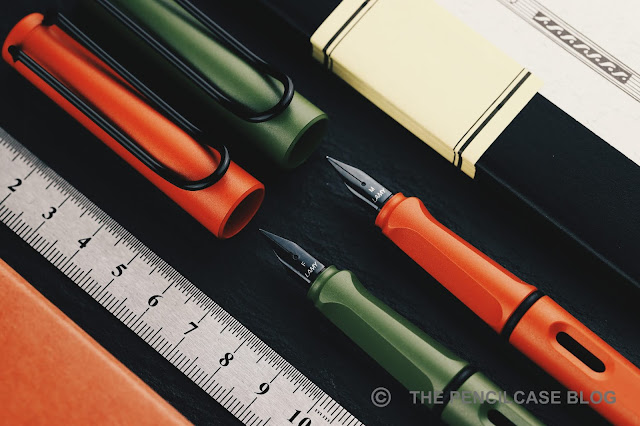 The firm – but fairly quiet – snap cap, as well as the ink window through the barrel, are both useful features to have on a workhorse ‘EDC’ pen. Additionally, I find the Safari beats the AL-star (another controversial debate!) due to its sturdy and durable injection-molded ABS construction. Especially the matte finish on the Savannah and Terracotta (and many other Safari colorways), is particularly good at hiding signs of wear and tear, though they do become shinier over time! In contrast, I’m always a bit nervous about putting a dent or scratch in the thin aluminum construction of the AL-Star. 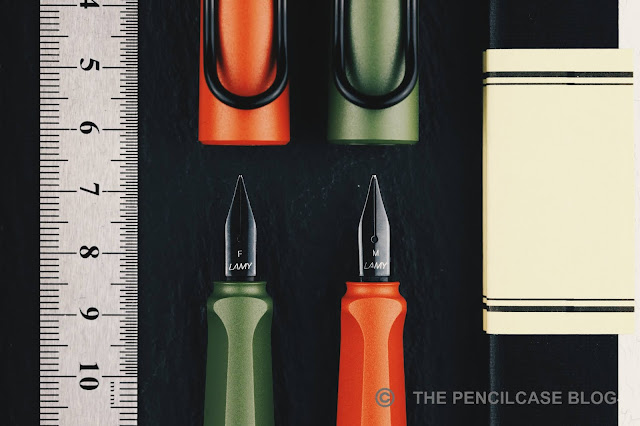 Lamy nibs are well-known to provide a subtle amount of pencil-like feedback while you write, which I actually enjoy. They are very responsive, reliable nibs with a well-balanced ink flow. I especially enjoy the fine nibs, which lay down a nice medium-fine, crisp line of ink. In the grand scheme of things, Lamy’s nibs aren’t exceptional in any way, but they do what they have to do without hesitation, and they’re easy and cheap to swap out, too. Certainly another reason why the Safari makes for a reliable workhorse pen! 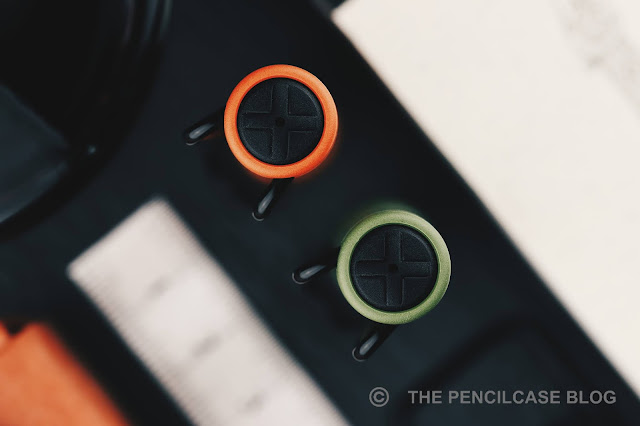 While I’m still a bit ashamed that it took me this long to do a full review of the Lamy Safari, I’m fairly confident that my general sentiment on them hasn’t really changed in all those years. Ok, I may have found the last two years of the Safari special editions (the Pastel and Candy trio’s) a bit lackluster, but the re-release of the iconic Terracotta and Savannah are a perfect way to reaffirm my love for the bold and playful – perhaps a bit fugly – workhorse of a pen that is the Lamy Safari. Yes, I think it still absolutely deserves its status as one of the best affordable fountain pens on the market.
The Safari Savannah and Terracotta comes in a choice of fountain pen, roller, and ballpoint, but not the mechanical pencil. In Europe, the special edition fountain pens retail for 20.9€ (at Site Sponsor Penworld, use discount code ‘pencilcase’ for 10% off!), which is about one euro more than the standard colorways. Overseas, the US price seems to be the same regardless of the color you choose, although you do pay more across the board, just under 30$.
Note: Penworld is a sponsor of this site. I received a discount on this purchase, which enabled me to write this review. I was in no way influenced in the making of this review, the opinions shared in this review are completely my own! This post does not contain affiliate links. 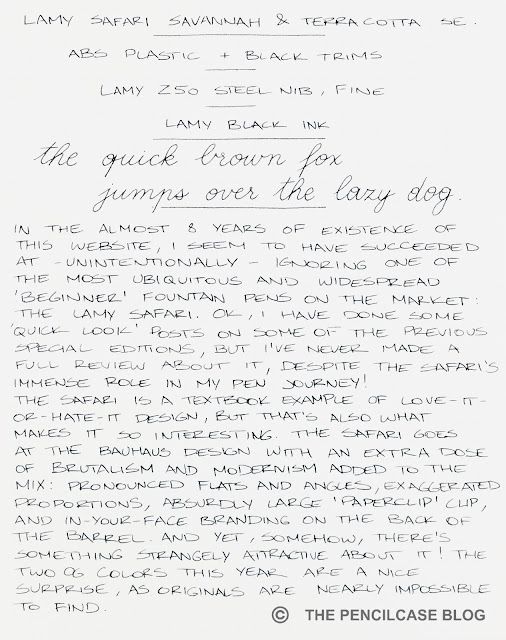 The Best Metallic and Glitter Pens

Victorian Senior Care: An opportunity to use your fountain pen when there is nothing to write in the digital era. read more

Visconti's flagship pen, the Visconti Homo Sapiens (already somewhat of an icon, despite its relatively modest 10 years of existence!) has seen an absolutely incredible variety of styles and finishes over the years: From the absolute classic Homo Sapiens Bronze age or - now discontinued - Steel Age (reviewed HERE) made from Visconti's proprietary lava resin, the various acrylic versions (such as the Chiantishire, that I reviewed HERE), the... read more

As a huge lover of Christmas and festive tidings, every Christmas, I take great pleasure in ensuring a Christmas-appropriate ink is in situ in one of my fountain pens. Last year, it was De Atramentis Santa (which confusingly smells of chocolate) and this year, I've opted for a personal favourite within the collection: J. Herbin Emerald of Chivor. My full review of it from 2018 can be seen here. I... read more

Thank you to The Good Blue Co. for sending this set over so I could share it with you! I think it's pretty great! There is a lot of interesting information about the company and the pens on the website, but I thought you'd just want to see the pen in action more than anything else, so that is what I focused on. Please do check them out here!If you... read more

journaling: a little every day goes a long way – my one line a day journal by leuchtturm 1917

Over the years, I've mentioned journaling quite a lot on here. In 2019, I decided to start a five year memory book and opted for the Leuchtturm 1917 offering because it was guaranteed the paper would take fountain pen well. Orange is one of my favourite colours so that was the colour I opted for. This is a thick notebook as you can imagine and so far, the hardcover... read more

The Best Refill For the Caran d’Ache 849

The Zebra Sarasa is no ordinary gel ink pen. While the Hi-Tec-C and Signo gel pens tend to grab the spotlight, pen nerds love the Zebra Sarasa for its smooth ink flow, fast-drying qualities, comfortable grip, wide barrel, and retractable tip (whew, that's a long list!). Watch the video below to see the Sarasa in action, and keep reading for a detailed look at each product... read more
Custom MessageSpecial Offer!Buy this Theme!HOT