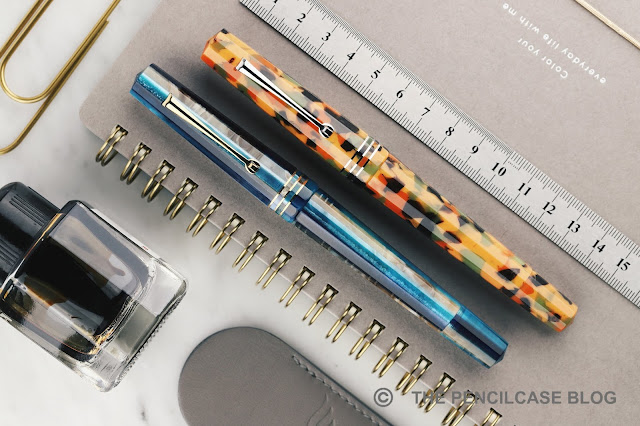 Despite being incredibly active in releasing new special editions and unique colorways – it seems like every week they make a cool new pen I want! – Leonardo’s product catalog is more or less established around two main product lines: the Furore (or Furore Grande), and the Momento Zero (or Momento Zero Grande). Of course, that’s not including the handful of limited editions (like the Cuspide, Messenger, or Speranza), though even those often take strong design cues from pens like the ever-popular Momento Zero.
But the pen we’re taking a look at today – a limited edition that’s yet to be officially released, mind you! – brings quite a different look to the table through the introduction of a fully faceted design: the Leonardo Tredici! My thanks go out to the people at Leonardo Officina Italiana, for giving me the opportunity to check out this pen well in advance of its launch! 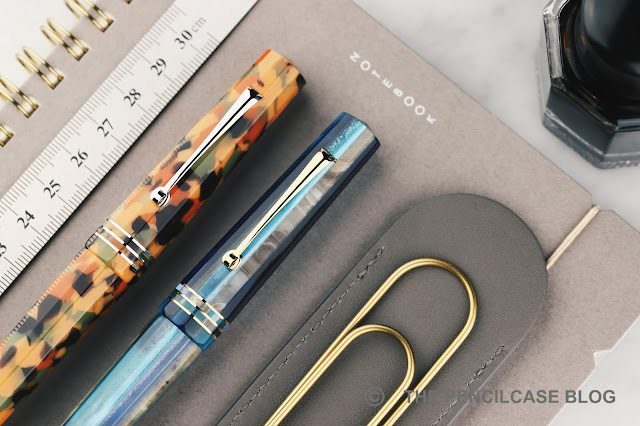 The Tredici appropriately gets its name from the Italian word for ‘thirteen’, the number of facets on the pen. Though the Tredici is unmistakably a Leonardo design (put it side by side with the Momento Zero, and the kinship is easily spotted), it does bring a more angular, tapered, design style to the table, whereas the Momento Zero and Furore are a bit more gently curved and rounded.
The lack of decorative trim rings on the back of the barrel or section, the fine rolling wheel clip, and the three cap rings, together with the faceted design of the Tredici, make for a pen that – in my opinion, at least – embodies the ‘vintage’ styling that many Leonardo pens try to capture, even better. The comparison with an old Omas paragon wouldn’t be too far off either, I think? 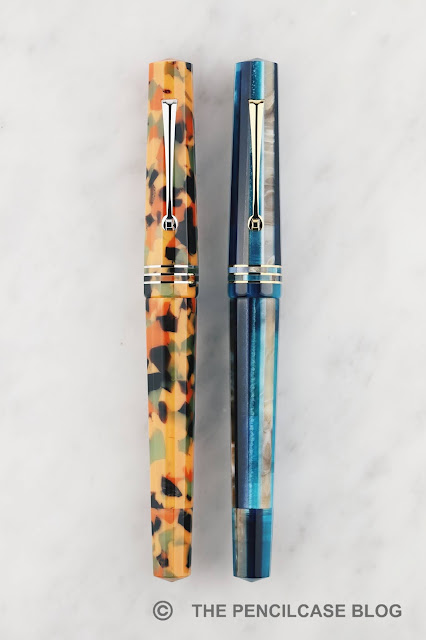 The Tredici wouldn’t be a true Leonardo pen if it wasn’t for some bright and colorful materials. So for this limited edition (70 pens for each color), it’ll be available in two distinct acrylic resins: Hawaii, and Arlecchino (Harlequin). Both materials have already made an appearance on previous Leonardo pens. The Hawaii is of course a tried-and-true staple among many of Leonardo’s pens, and it never fails to impress me with its complex mix of blue and brown hues, pearlescence, and translucence, all mixed in through the striped acrylic material. 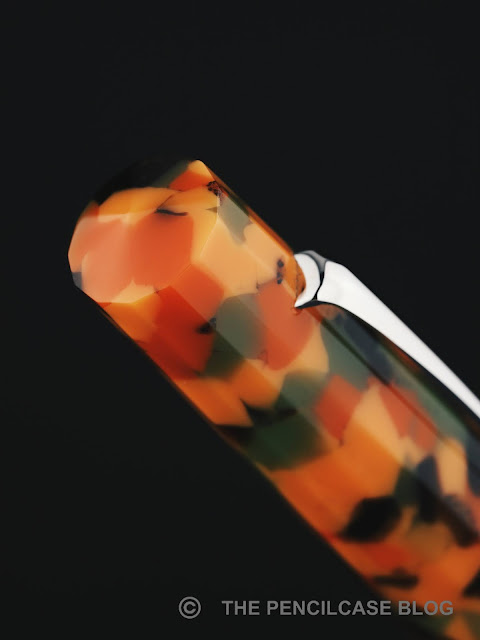 The colorful yellow/orange/green flecked Arlecchino material (an acrylic recreation of a celluloid Omas used to use back in the day) is a bit less common and tends to only be used for limited editions. Being partial to orange pens, I quite enjoy the eclectic and vibrant mix of solid colors in the Arlecchino, but it’s certainly a love-it-or-hate-it material!
While I think there’s something to be said for both colorways (both will definitely turn heads!) I’d also like to see the Tredici in a different – more muted – material choice, as the emphasis on the faceted shape is perhaps a bit lost in the ‘busy’ patterns of these two materials. 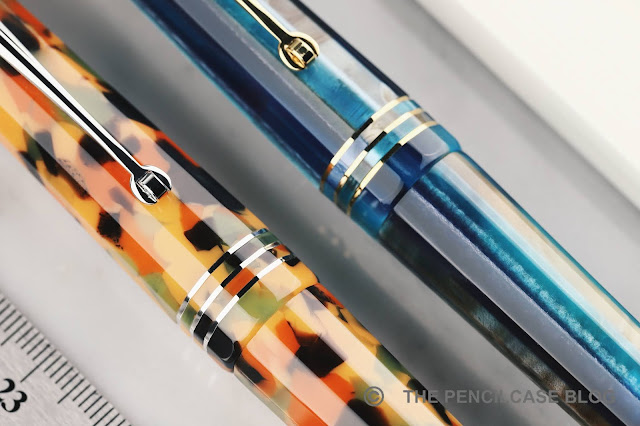 Since these are pre-production pens, there are a few (small) details that I was told would still be addressed before final production: While the thirteen facets on cap, barrel and piston knob align fairly well (the cap has triple-start threads, so only one orientation will align them), it’s not absolutely perfect. The faceted trim rings on the cap will also be fine-tuned a bit in the final production, making them sit more flush and aligned with the surface of the cap. These are relatively small details, but making them perfect is key (and shows a keen eye for detail from Leonardo), as the facets are of course the centerpiece of the Tredici’s design!
The Tredici is slightly shorter than the Momento Zero Grande and appears a bit skinnier as well (partially due to the strongly tapered shape). Though with a capped length of 14.8 cm/ 5.83″, and an uncapped length of 13.3 cm/ 5.25″, it still certainly classifies as a large pen. The Tredici weighs just 25 grams, which makes it very lightweight and nimble, especially for a rather large pen like this. For those that prefer an even larger pen, the Tredici can be posted very securely, and the cap doesn’t add any noticeable backweight. 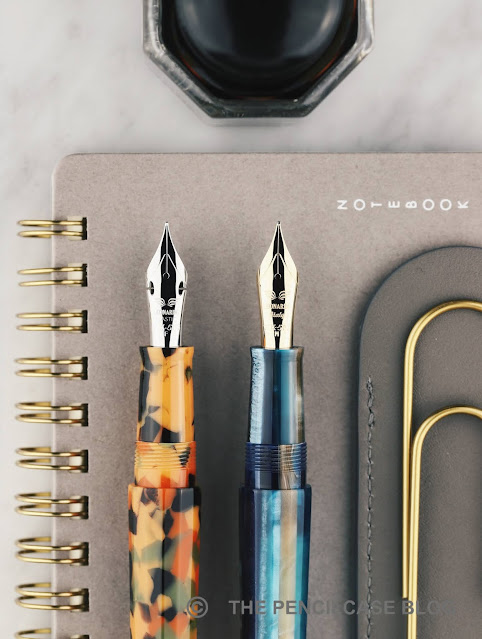 For the Tredici, Leonardo went with a traditional hourglass-shaped section (very similar to the section of the Cuspide, but narrower) as opposed to the stepped design on the MZ. Just like the rest of the Tredici, the section is on average about a millimeter narrower than the Momento Zero. While that’s a relatively minute difference in thickness, it is indeed noticeable in the hand. The section on the Tredici is decently long, and the threads are shallow and unobtrusive. Though in terms of comfort, the Tredici does take a slight hit with a fairly sharp drop off towards the barrel, which I did notice in my grip. The Momento Zero Grande has a similar step, but the rounded trim ring on the edge makes the MZ gentler to the touch. 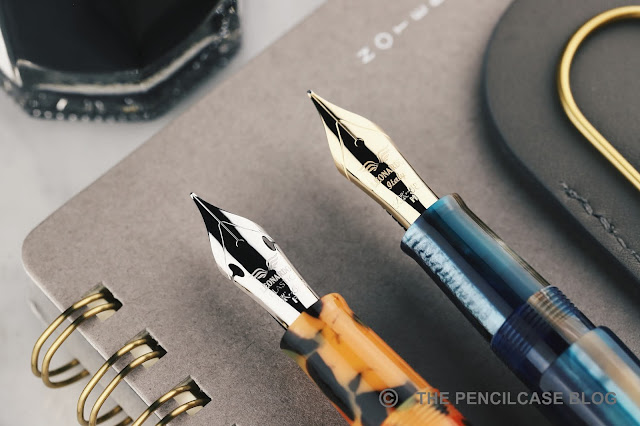 Under the hood, you’ll be greeted by a 14k gold nib (no option for steel nibs, as is the case on most of Leonardo’s Limited Editions). Leonardo made a complete switch to JoWo last year, so that’s what you’re getting here, regardless of the nib width you choose. I tried out both a regular medium and one of their ‘elastic’ (read: soft, not flex) fine nibs. The 14k gold nib is backed up by Leonardo’s own ebonite feeds, and metal piston-filling mechanism, the same as on Leonardo’s ‘Grande’ models. 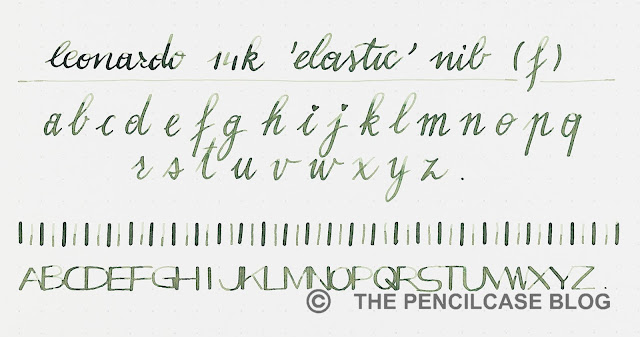 The fine elastic nib – with its distinct cutouts on the sides – has a noticeable feedback to it when you write, and the softness creates a line width on the broader side of a western fine, perhaps closer to medium. The cutouts are meant to create a more bouncy, cushioned writing experience, not for wet noodle vintage super-ultra flex line variation. That said, you can certainly get enough line variation out of it for some elegant flourishes in your writing. 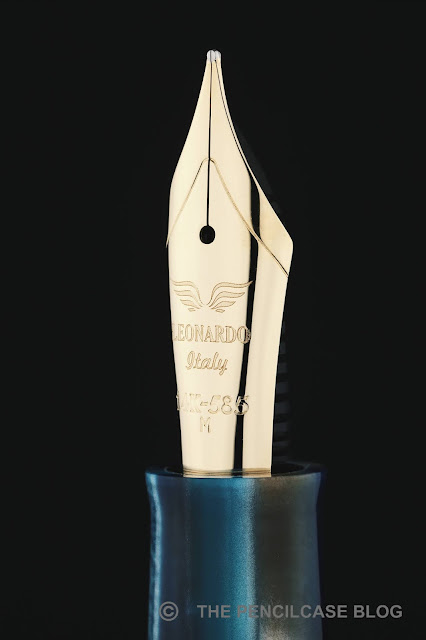 For the medium nib, I anticipated the fact that all my Leonardos with ebonite feeds have all been very wet writers, so I tried to balance it with the super dry Kyo-Iro Stone Road of Gion ink (lovely shade, but man is it a dry ink!). Unfortunately, even the very generous ebonite feed was no match to the desert-like dryness of Stone Road, so I went with Diamine Evergreen instead. After that, the medium nib performed wonderfully; a very smooth, responsive writer, backed up by a rich flow from the ebonite feed. 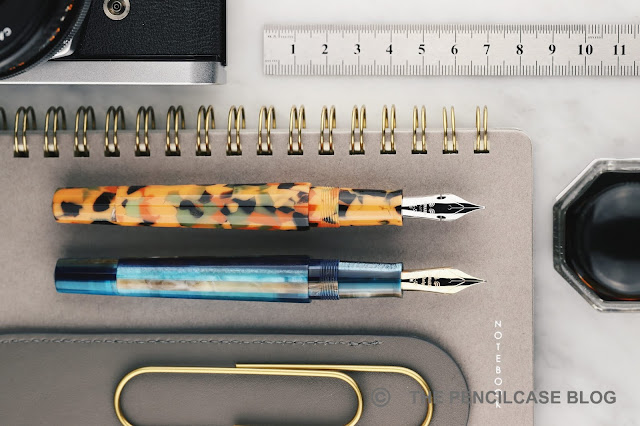 The Tredici is a fresh design from Leonardo’s stables, a bit outside of the comfort zone of their current pens. In my opinion, it’s probably their best representation of the vintage Italian design language, so far, and the attention to detail is on point.
As the faceted design inevitably increases the production difficulty, this, unfortunately, translates in the retail price of the Tredici: 595€ (653€ for the soft nib). That’s 100 euros more than the Momento Zero Grande with a gold nib. Though for a limited edition of just 70 pieces in each colorway, the Tredici still comes in far below other Leonardo LE’s (like the 850€ Cuspide)!
NOTE: The pens in this review were provided on loan by Leonardo Officina Italiana. I was in no way paid, or influenced in the making of this review, the opinions shared in this review are completely my own. This post does not contain affiliate links. 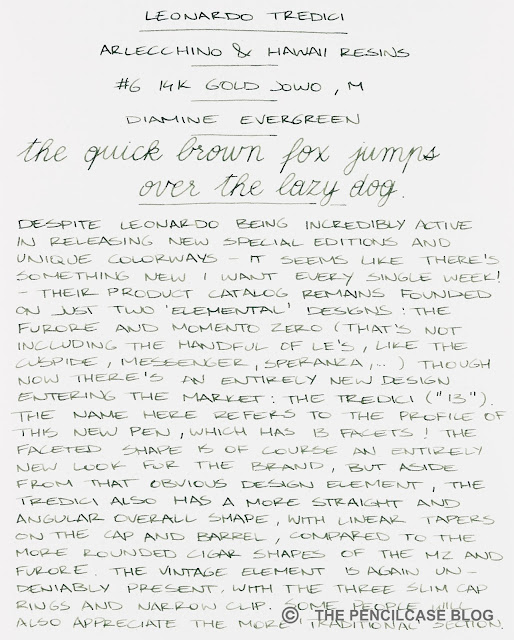 The legend of the Blackwing exceeds the reputation of any other pencil. Its exceptional balance of softness, darkness, and sharpness, set off by an elegant ferrule and replaceable eraser, makes it instantly recognizable and highly addictive. Celebrated authors, musicians, and artists declared that they could not work without the original Blackwing after it was discontinued in 1998. The revived family of Blackwing pencils and companion products... read more

I’ve written about the Spot pen before. The search box above right will find those articles if you’re interested. These pens sell well, better than the average Mentmore. In terms of build quality they’re about the same as the Mentmore Autoflow but they are attractive to collectors as something different with their white dot and […] read more

If crisp, fine lines are what you crave in an everyday writing instrument, nothing beats a fine-tip gel pen. Ballpoints and rollerballs have their place, but as certified pen fanatics who have tried everything from Bics to Montblancs, fine-tip gel pens are at a completely different level when it comes to precision. Fine-tip gel pens let you fit more writing onto every page and notecard. They... read more

Today I am using "Abhay Pen Agencies " made ACRYLIC TANISHQ (eyedropper).. I came to know about them browsing through FPN . They make a... read more

Pelikan got out ahead of their vendors today, taking the opportunity to break the news of their next big fountain pen release via their Instagram account. Rumors about this one started at the end of March and now we finally have our first look at the upcoming M605 Tortoiseshell-Black. This newest M605 takes the iconic […] read more

using my bullet journal to record my running progress

In December 2020, I decided to start running regularly. Having been a keen sportswomen prior to that (regular netball, the odd game of squash, basketball, etc), I had a good basic level of fitness but for some reason, could never get into running and actually loathed it a bit!However, lockdown changed things. Team sports were not allowed, meet ups were not allowed and most recreational grounds/gyms/fitness centres were closed.... read more
Custom MessageSpecial Offer!Buy this Theme!HOT