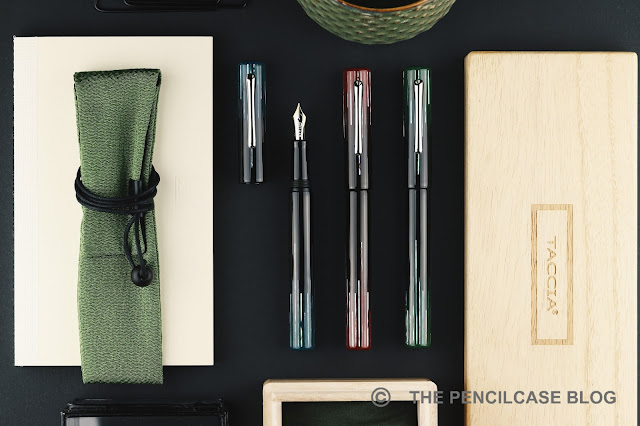 We’re taking a look at another new – to me – brand today: Taccia! Despite only having been around for about 20 years, the history of Taccia is rather convoluted. The TL;DR is that they started as a US-based company, but they’re now part of a larger Japanese stationery conglomerate (Nakabayashi).
Taccia’s earlier products – mostly in the sub-200$ range – never really managed to captivate me. Though things certainly became a bit more interesting once they started getting into urushi, Raden, and maki-e, which seems to have really gained them some more traction within the pen community. Even though they might not (yet) enjoy the ‘cult status’ of big brands like Nakaya, Namiki, or Sailor in the Urushi game, Taccia’s urushi work really deserves some attention, as I think they’re doing some really interesting and creative things with traditional lacquering techniques!
Some of those urushi and Raden techniques make an appearance on the Taccia Polar Lights fountain pen collection, which we’ll be looking at today. My thanks go out to Catherine from Sakura Fountain Pen Gallery (one of our site sponsors!) for trusting me with these beauties for a short while! 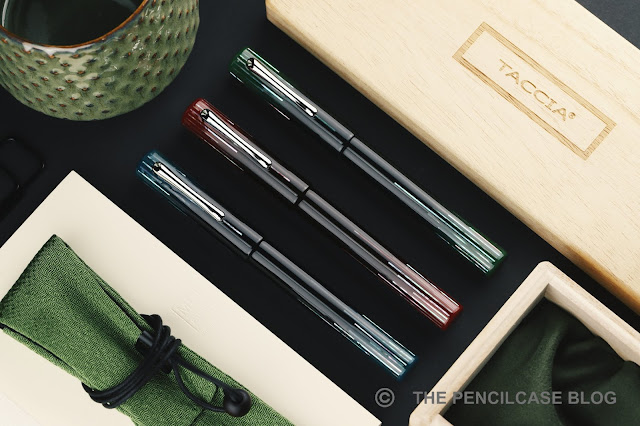 The Polar Lights pens are based on a standard ebonite base shape that Taccia uses for most of their urushi collections. The design of the pen itself is kept quite simple and straightforward (which isn’t too uncommon for Urushi and maki-e pens, as it puts more emphasis on the urushi finish itself): a straight, cylindrical pen with flat finials. The barrel is quite long, which makes for a rather unusual cap-to-barrel ratio. The cap is slightly wider than the barrel, though it transitions smoothly into the barrel with a rounded off edge. 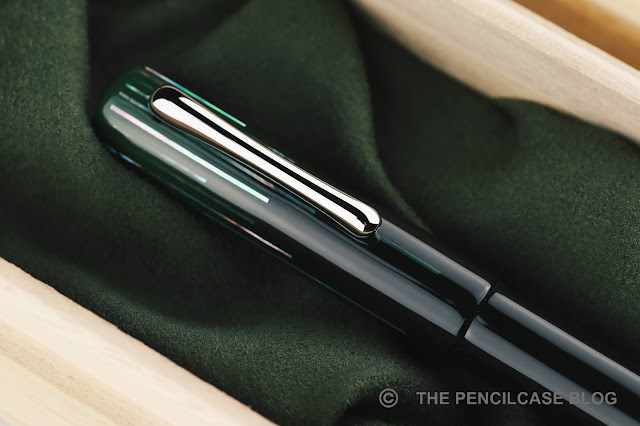 Taccia’s urushi pens all have clips. Practical? Sure, but I find that clips tend to interfere with the urushi finish (especially on more complex Raden and maki-e finishes) so I’d have preferred a clipless option. Besides, it’s not like I tend to casually clip thousand-dollar pens to my shirt pocket anyway (that’s a bit too much livin’ on the edge for my taste). That said, I do have to admit that this particular clip looks quite good. The curvy and rounded shape of the clip provides a stark contrast with the straight and angular design of the rest of the pen. 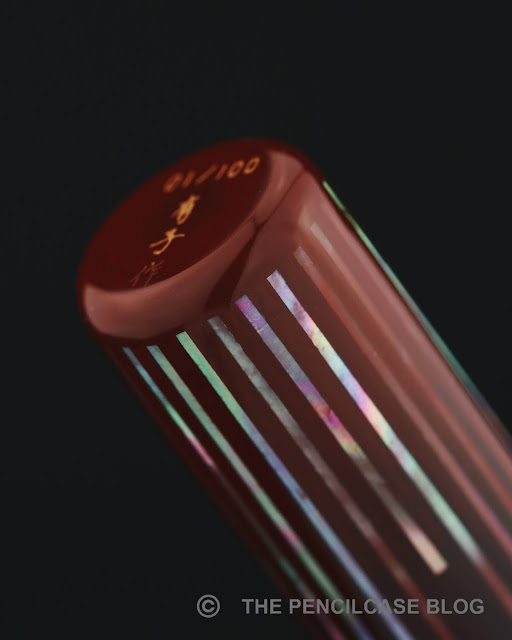 As mentioned at the beginning of this review, Taccia’s urushi pens really caught my eye through the wild and uncommon combinations of different lacquering techniques. For the Polar Lights series, the base is lacquered with an Akebono-like gradient of urushi that transitions from a dark color in the center, towards a brighter color at the finials. They overlaid that with precisely arranged Raden strips, applied lengthwise around the top of the cap and end of the barrel. 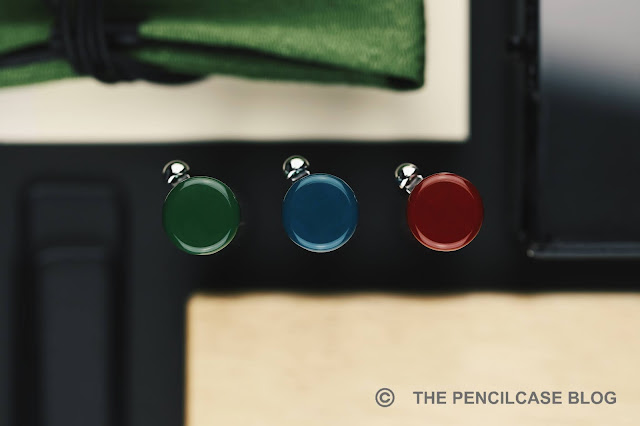 The Polar Lights is available in three colorways: red (Amairo Haruakane), green (Amairo Jiu), and blue (Amairo Hekiku), and they really outdid themselves on the colors of the urushi. The colors are vibrant, but not too bright, and the finish is consistent. 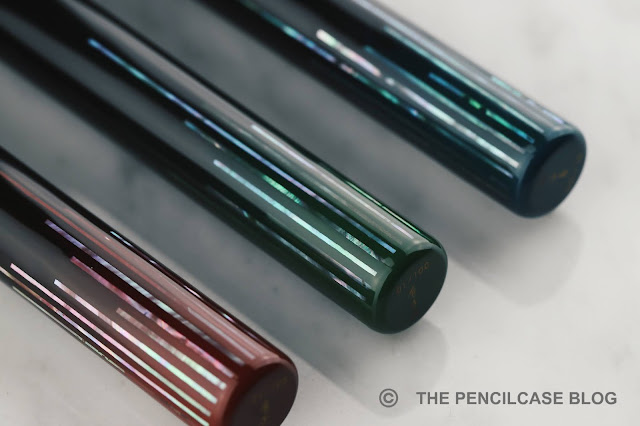 Upon closer inspection, there’s actually more to the finish than you may think. It looks like only the finials are red, green, or blue, and it fades out to black towards the center of the pen, but that’s actually not true. It’s very subtle, but the base color is actually dark green, red or blue, to match the rest of the pen. Less subtle are the Raden strips, which are color-matched to the pen (if I’m not mistaken, they do this by painting the back of the mother of pearl). The end result is a striking pen with more than enough shimmering Raden to get around, and yet it’s not too crazy for my – typically subtle – taste. 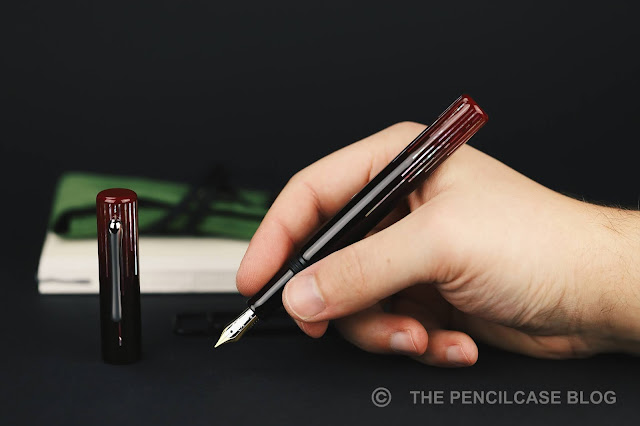 The proportions of the Taccia Polar Lights are quite interesting. With 15 cm/ 5.9″ capped, it sits comfortably amongst other large, oversized pens like the Montblanc 149. The straight, untapered shape of the Polar Lights doesn’t allow for the cap to be posted. Though, with an uncapped length of 13.2 cm/ 5.2″, I’ve never missed the ability to post the cap, anyway. 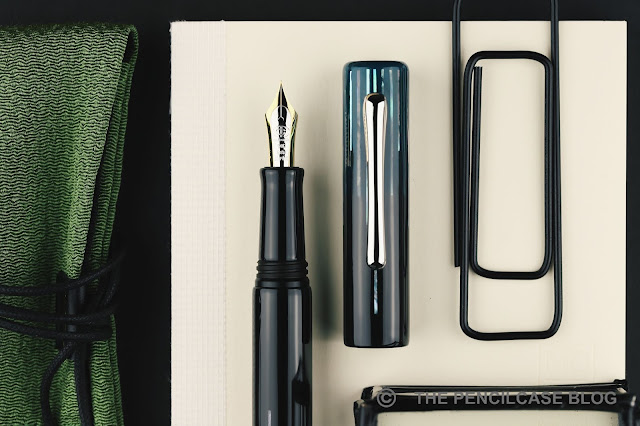 So they’re not small, and not particularly slim either (though not quite as chubby as the Montblanc 149 or Eboya Houga Large, pictured above). BUT! The section is surprisingly narrow compared to the rest of the pen. At the narrowest point, it measures just 9.7 mm/ 0.38″, which is a bit on the skinny side for my taste.
With a narrow section like that, you do get quite a transition towards the barrel, but it’s quite gradually stepped and the block threads aren’t sharp, so you don’t notice it too much in the hand. All in all, it’s not an uncomfortable pen to write with, though I certainly would’ve preferred a slightly wider section. With a total weight of 30 grams, it’s not too heavy for a pen this size. 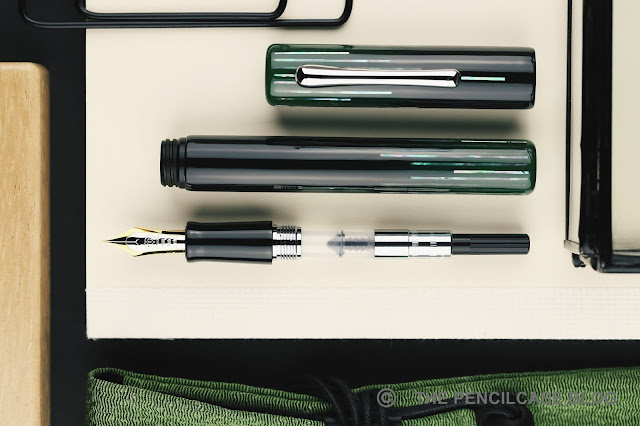 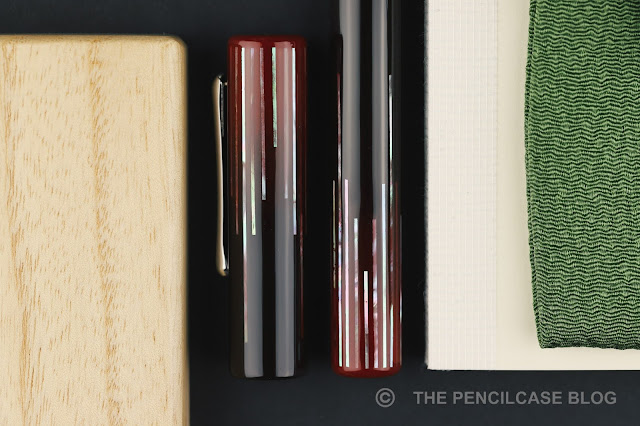 On the inside of the cap, you’ll find a spring-loaded inner cap, similar to those found on Wancher and Esterbrook pens, to prevent the nib from drying out. Though the implementation on the Taccia pens seems a bit more subtle (the spring tension isn’t so strong) making it more practical and easy to use. 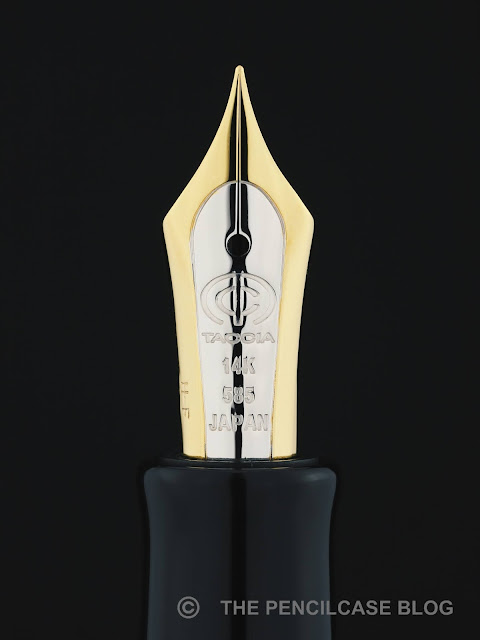 A particularly interesting point about most, if not all, Taccia pens – and presumably also a firm selling point for those who like Japanese fountain pens – is that Taccia actually uses Sailor-made nibs in their pens. Western brands that manufacture their own nibs, don’t typically share them with other brands, but it’s cool to see that Sailor has a more open mindset towards this.
What you get under the hood is a 14k gold, small bicolor nib, the same size as the nibs found on Sailor’s 1911S or Pro Gear Slim. Yes, that’s exactly how you’d imagine it in your head: a very tiny nib, on a pretty huge pen! Because the section tapers down quite strongly, the nib does manage to still look somewhat balanced on this massive pen. Though, needless to say, this pen at the very least deserved one of Sailor’s larger 21k nibs. The nib received a custom engraving with the Taccia logo, and it’s bi-color plated. 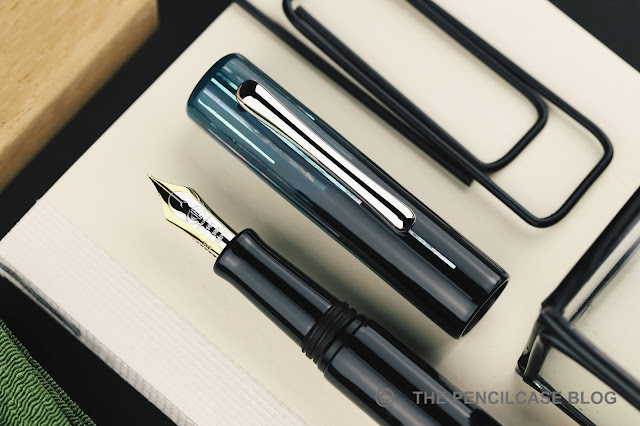 To be honest, the nib performance was not quite as spotless as I had anticipated. Although Japanese nibs are usually worshipped as the pinnacle of consistency (and to be honest, they typically are more consistent!), my experience with these nibs illustrated that any brand can have nib issues out of the box, not just Western brands. I tried two hard Fine (H-F) nibs, and the first one was considerably drier and finer out of the box, which in turn also made it more feedback-heavy. The second one matched my expectation pattern, with a more balanced ink flow, and a line width comparable to a narrow Western EF. To be fair, both nibs were consistent, skip-free writers, and the ink flow (though dry on one of the pens) never hesitated. 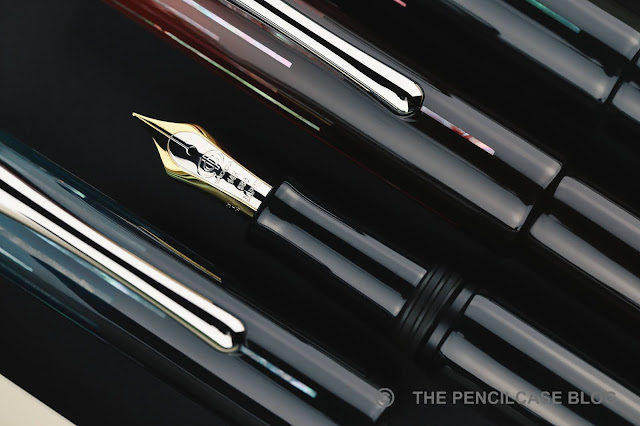 The Taccia Polar Lights fountain pens sell for 875€ (incl. VAT, at our sponsor Sakura Fountain Pen Gallery). Oh, and it’s a limited edition as well, with only 100 pieces per color being made. To call it a bargain would perhaps be a slight overstatement. But for an urushi pen with Raden decoration, that’s actually quite a competitive price!
These products were provided on loan by Sakura Fountain Pen Gallery, so I could write this review. I was in no way influenced in the making of this review, the opinions shared in this review are completely my own! This post does not contain affiliate links. 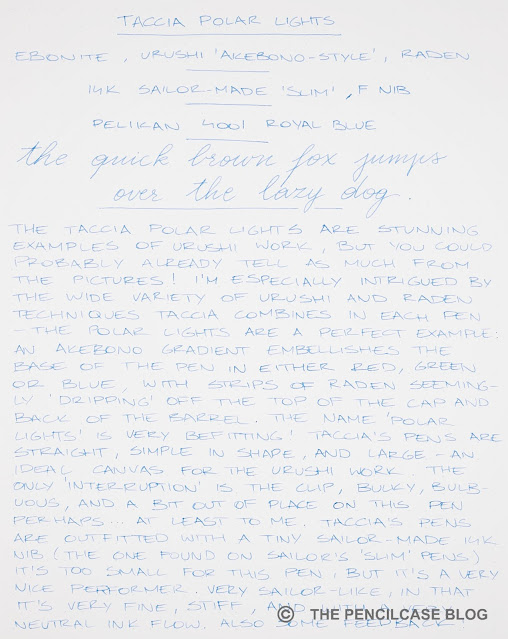 How to Use Small Notebooks

Small notebooks may seem like impractical novelties, but they’re actually useful additions to your everyday carry. Because of their size, miniature notebooks fit neatly in pockets and purses so they are always at hand. There’s no hard and fast rule that determines the size of a small notebook: at JetPens, we consider any notebook smaller than A6 (5.5” x 3.7”) to fit the criterion. In this... read more

what’s in my bag #25: my work backpack by sweaty betty

The majority of my work days, I carry this Sweaty Betty quilted backpack. It's pretty functional and quite well built and considering that it's on the pricier end for a backpack, I would hope so! I also really like the two pockets at the side. On rainy days, one side is useful for an umbrella and the other side usually has a folded up tote bag. Contents (top left, clockwise):... read more

How to use MoTEX Label maker E-101

How to use Shing DIY Stamps

It is hard to believe that 2021 is just two weeks away from drawing to its close. Not only is another disjointed and surreal year ending but it seems like the long shadow of the coronavirus pandemic will carry well into 2022. To counteract the doldrums of the pandemic, many have sought refuge and solace […] read more

The LAMY Safari is a minimalist favorite in the world of writing instruments. Since its launch in the eighties, the LAMY Safari has expanded from fountain pens to include other writing instruments, like rollerballs, ballpoints, and mechanical pencils. LAMY didn’t stop there: a pen made of aluminum known as the AL-Star soon joined the family, followed by the Vista and Lx. In this guide, we’ll discuss... read more

This Faber-Castell Essentio fountain pen has been in use for at least eighteen months now (I can't even remember when I bought it). It was an upgrade from the Lamy Safaris and Al-Stars I was using as my main work pen. Seeing the lovely rose colour and knowing that Faber-Castell is a fountain pen brand with a good reputation, I was surely onto a winner.... right?Well, you'll probably have... read more