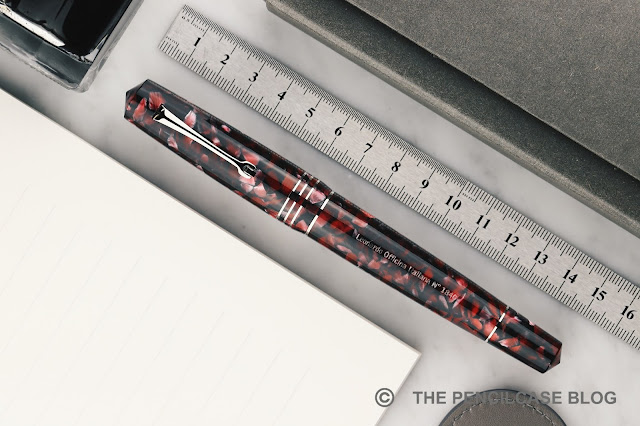 It’s of course no secret that I’ve been enjoying Leonardo pens quite a bit in the last year, maybe even a bit too much! As if they’re made from catnip, I found myself strongly drawn towards almost every new pen they released in the past twelve months… and they released A LOT of new pens, mind you! A consistent personal favorite among all those new creations has been the Momento Zero Grande, as well as all the special editions based on this model. I already reviewed the MZ Grande once, back in 2019 when it first came out (review HERE). However, shortly after,  in 2020, the MZ Grande already went through a bit of an update. 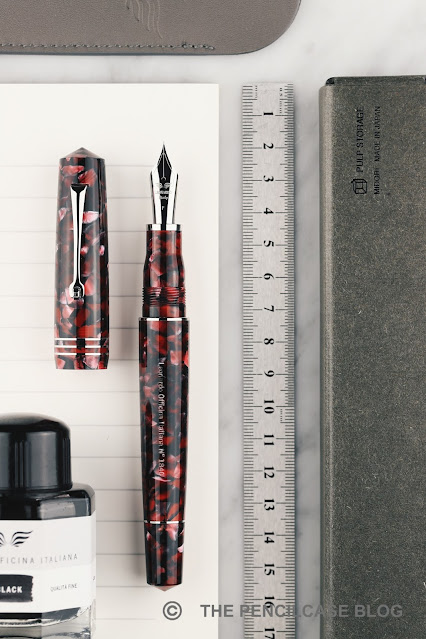 In a – futile – attempt to somewhat keep up with the ruthless pace of new Leonardo releases, I’ll be covering the changes that were made in the Leonardo Momento Zero Grande ‘2020 model’, and in two follow-up posts, we’ll highlight some hot off the press colorways, as well as the new #8 nib version – So stay tuned for a proper Leonardo overdose in the coming days!
Before we start though, I’d like to thank Salvatore Matrone – owner of Leonardo Officina Italiana – for being a true enabler, sending a lot of new creations over for me to try! Needless to say, barely any pens made it back to Italy and my Leonardo collection expanded quite a bit in the process of writing these reviews (with my wallet in the background, crying for help!). 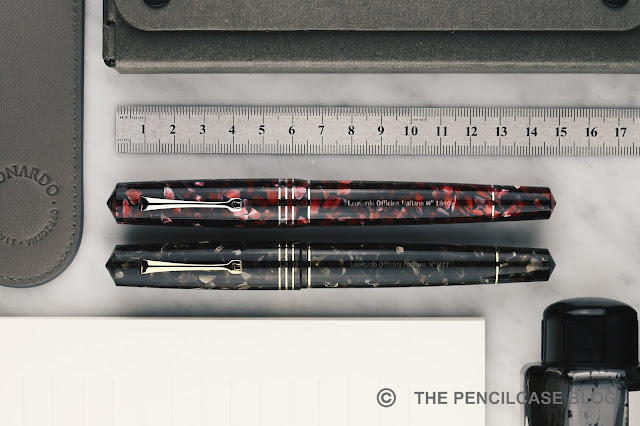 Putting the ‘old’ and ‘new’ side by side, what has actually changed about the Momento Zero Grande? Four vibrant new colorways entered the standard collection, replacing the mostly darker materials of the original release. The one shown here is the ‘Luna Rossa’ acrylic, a beautiful red flecked material that’s quite beautiful and by far the least ‘flashy’ of the new colors. But besides that, the differences are admittedly quite subtle. Especially in terms of design, you’re looking at an almost identical pen.

However, the one subtle aesthetic change does manage to alter the looks of the pen a bit IMHO: gone is the vintage-looking ‘step’ on the cap lip. The new cap design still transitions almost seamlessly into the barrel, but now with a straight taper. Admittedly, it’s not the worlds’ most exciting change, though the new, more streamlined design does make the MZ Grande tie in a bit better with the shape of the standard Momento Zero. 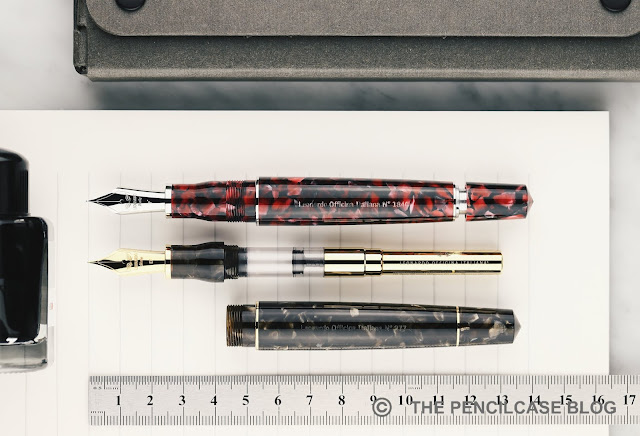 The major change of the MZ Grande 2020, is one you won’t see from the outside! The inside of the pen was reworked entirely, and the MZ Grande meant the first real foray for Leonardo into creating ‘true’ piston-filled fountain pens. While the original Grande already came with a special, large capacity captured converter, operable from the blind cap on the back of the barrel, this custom piston mechanism adds a filling system that’s often perceived as more ‘luxurious’ – a feature you might come to expect on a pen that does cost close to 300$. The mechanism is all-metal, so longevity shouldn’t be a concern. The change to a piston mechanism brings an even larger ink capacity (1.5mL vs. 1.2mL). Though as a trade-off, it takes away the possibility to check the ink level, since there is no ink window.
A minor detail about the piston mechanism that might annoy some users, is that the piston knob doesn’t tighten extremely securely against the barrel. While it coming loose won’t cause accidental ink spills, it is indeed a bit of a pet peeve and it’d be nice if they found a way to improve on it. (Perhaps an idea for the 2021 version, Salvatore?) 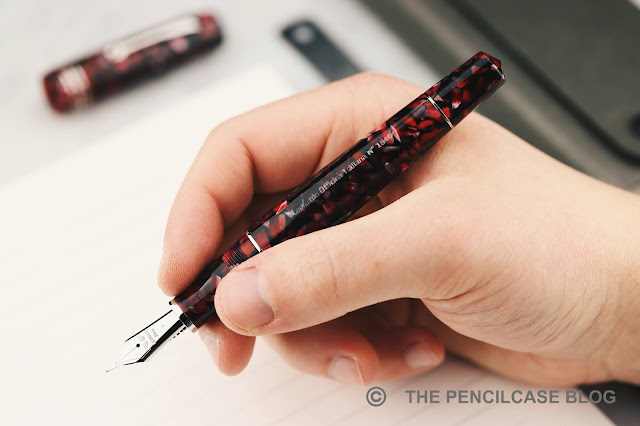 As I already mentioned, the Momento Zero Grande didn’t really change much design-wise, so the dimensions all pretty much hold true. While the Furore Grande (reviewed HERE) is now the biggest pen in Leonardo’s product lineup, the Furore’s streamlined profile doesn’t quite convey the imposing stature like the bulkier MZ Grande – though both are of course massive pens without a doubt!
On paper, the MZ Grande measures 15.1cm/ 5.595″ capped, and 13.6cm/ 5.36″ uncapped. In the hand, those numbers translate to a pen worth every part of its ‘Grande’ nametag. The attentive reader will notice that the 2020 measures one whole millimeter taller than the old version… though that’s negligible, of course. Weighing in at 30 grams – 5 grams less than the previous version, despite the all-metal piston mechanism! – the 2020 version gets rid of the slightly back-weighted balance, which only adds to the comfort of an already comfortable pen. 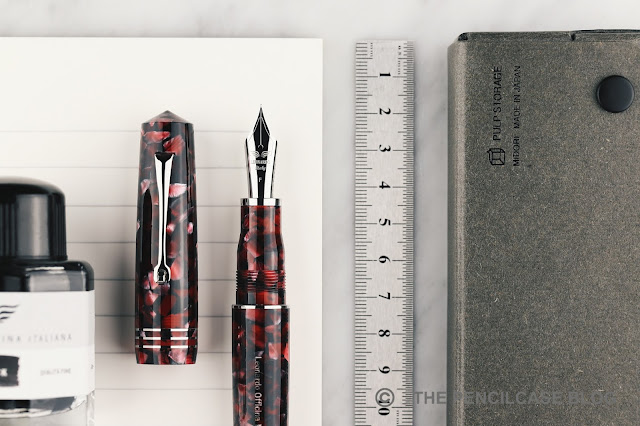 Under the cap, the section shape remains the same. That’s to say: a slightly quirky two-step taper, which isn’t as weird in the hand as it looks, though I understand that it might not appeal to everyone. (a good friend of mine – you know who you are – actually doesn’t own a Leonardo solely because of the section!) The step towards the barrel also remains present. Though just like before, I find that the rounded-off metal ring creates a rather comfortable transition that doesn’t interfere with my grip too much.
While Leonardo started out using Bock nibs exclusively, they gradually made the change towards JoWo. The release of the MZ Grande 2020 was caught in the middle of that change, and so it could be that you either got a Bock or a JoWo nib. In 2021, we should be seeing exclusively JoWo nibs, though I don’t know if that’s already the case. I own both, and across the (too) many Leonardo pens I own, I’ve only had maybe one or two behave slightly subpar out of the box. Other than the odd exception, both the Bock and JoWo nibs are fabulous writers – in no small part due to the in-house made ebonite feeds that provide a rather heavy, juicy ink flow. 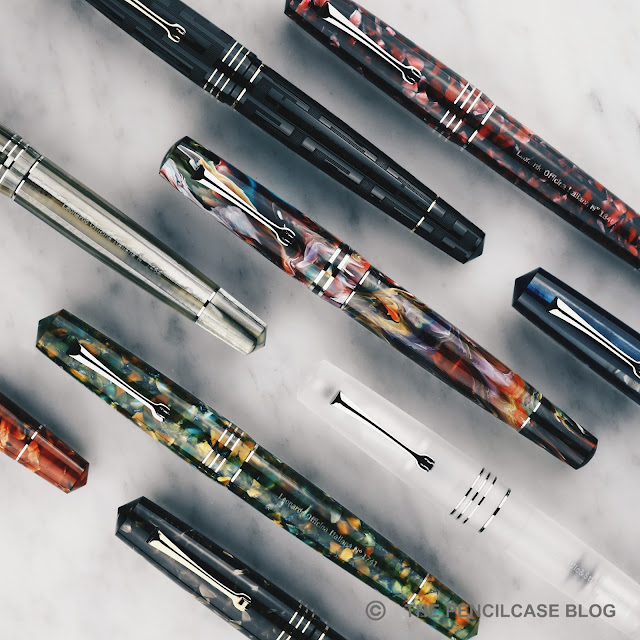 Don’t take my word for it when I say the Leonardo Momento Zero Grande 2020 is a fantastic pen – I’m a fanboy and I cannot lie. Instead, I think it’s quite telling how Leonardo managed to become one of the hippest and trendiest pen brands of the moment on such short notice… they must be doing something right. Right?
It’s nice to see that the inclusion of a piston mechanism didn’t drive up the price. As before, the Momento Zero Grande still retails for 295€/ 295$ without VAT (at Site Sponsor Casa Della Stilografica, use discount code ‘Firenze’ for 10% off!). While that certainly makes the Grande a step up from the rather accessible regular Momento Zero, you do get some worthwhile ‘upgrades’ for the premium(the ebonite feed and piston mechanism), which the regular version doesn’t have. I also just really enjoy the large, oversized footprint, though that’s of course a very personal preference!
NOTE: I received a discount on the purchase of this product by Leonardo Officina Italiana, so I could write this review. I was in no way influenced in the making of this review, the opinions shared in this review are completely my own. This post does not contain affiliate links. 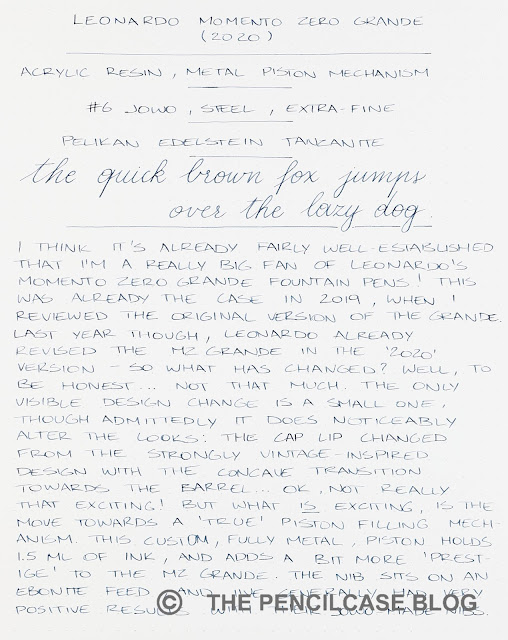 A customizable multi pen, or multi function pen, lets you fill a pen body with your choice of refills. While most multi pens let you pick from read more

Candace/Inks and Anchors on InstagramNine Bespoke Pens on InstagramIf you enjoy and/or appreciate and you want to lend your continued support, please do check me out on Patreon. You can pledge your support and/or undying love for as little as $1. You are in no way obligated to do so. I appreciate your readership, viewership, and your support so much - thank you!  read more

My favorite part about videos is obviously the writing sample, and I wish I could do entire videos of just writing samples. Then I decided to do little snippets, for those who don't want to hear me ramble about the pen, but want to see some inky goodness to brighten their day! I hope you enjoy these snippets as much as I do! Here is the full review of... read more

How to use Numex Batch Coding Machines

Schneider Rollerball pen One Change – for sustainability in the office 🖋

Thank you to Paper Mind for sending this notebook for me to check out! It's quite lovely and I'm pretty happy with the experience. If you'd like to get one, check out their shop!If you enjoy and/or appreciate and you want to lend your continued support, please do check me out on Patreon. You can pledge your support and/or undying love for as little as $1. You are in no... read more

No matter how many Opus 88 pens go through my hands, time and time again I'm impressed with their fun designs and impeccable quality! I particularly enjoy seeing their demonstrator models whenever they come up with a new model, those always inevitably pop up, though sometimes only after a while.  In the case of the Opus 88 Jazz, it took them a short while to move on... read more
Custom MessageSpecial Offer!Buy this Theme!HOT